Tortoise that lost a leg walks again thanks to a wheel! 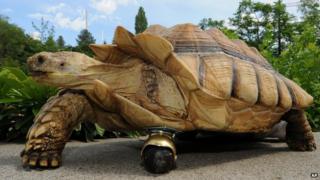 A tortoise that had a leg amputated is now walking again - thanks to a swivelling wheel.

Vets had to remove Gamera the tortoise's front left limb after it became badly damaged.

But instead of giving it a hi-tech artificial leg, they fitted the reptile with a ball-shaped wheel from a DIY store!

Experts there decided that sticking a wheel on the tortoise was the best bet of giving it a long life.

Dr Finch reckons 12-year-old Gamera is likely to live for decades - and get much bigger.

The African tortoise is now being looked after by the team that treated him at the university.