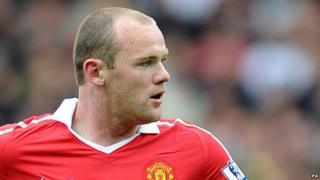 Wayne Rooney is the name that most footie fans want on the back of replica Premier League shirts.

The Manchester United striker has topped a survey of worldwide kit sales during the 2010-11 football season.

It's the first time Rooney has been number one. He knocked Fernando Torres off the top spot.

Steven Gerard comes in third place, while Rooney's striking partner Javier Hernandez, aka Chicharito, is in at four.