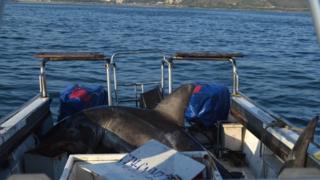 Researchers were amazed when a great white shark leaped onto the back of their boat in South Africa.

The 3m long animal was attracted to the bait that was being thrown into the sea by the research team.

They wanted to lure sharks closer so that they could identify and count them.

But the bait worked a little too well and the hungry shark leaped from the water and onto the boat!

Luckily no one was injured but the shark did become wedged between the engines and some containers.

After trying to move the shark from the boat themselves, the research team decided it was best to head back to land where it was lifted off by a crane.

"This must have been an incredibly stressful experience for the shark," said Ryan Johnson, who was involved in the rescue. "These sharks belong in the sea, they don't belong on land."

The big fish was last seen swimming strongly out to sea and didn't look like it had been harmed by the experience.

The researchers don't think the animal attacked the boat deliberately.