Mount Everest to get re-measured to check height 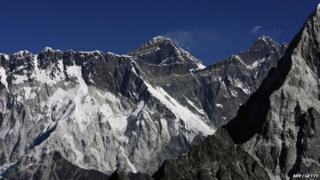 It might be the tallest mountain in the world but experts in Nepal are planning on re-measuring Mount Everest.

A team of scientists are going to re-measure the huge rock to settle an argument between China and Nepal.

The mountain sits on the border between the two countries, but neither nation can decide on its actual height.

Chinese experts reckon that only the rock should be counted, but Nepalese scientists think that the snow should also be included in the measurement.

At the moment the official overall height of Everest is thought to be a massive 8,848m - taller than 27 Eiffel Towers stacked on top of each other!

But some experts think that both countries could be wrong as they believe that the mountain is actually getting higher.

Geologists have said that the height may be changing because of the movement of tectonic plates under the Earth's surface.