Guide: What does famine mean? 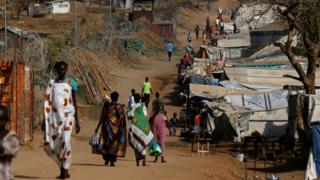 A famine has been declared in the African country of South Sudan.

The United Nations (UN) and the government in the country have said that around 100,000 people are facing starvation.

The famine is affecting a northern part of the country called the Unity state but aid groups say the famine could spread if urgent help is not given to the people there.

They say more than 40% of South Sudan's population are in urgent need of food.

There have been warnings of famine in Yemen, Somalia and north-eastern Nigeria, but South Sudan is the first country to declare one, in any part of the world in six years.

But what does the term 'famine' mean?

What is a famine?

The word famine is used to describe a hunger crisis at its worse.

Famine is the most serious of five phases that are used by the UN and most aid agencies.

Certain requirements have to be met for a situation to be called a famine. These include:

The declaration of a famine doesn't force governments and charities to act or do anything. But it's hoped it works as a wake-up call.

The word is used carefully though.

"It is a very strong word, with a strong impact," according to Brendan Paddy of the Disasters Emergency Committee - an organisation that launches big appeals for aid overseas. "We have to be precise about how we use it."

"We have to raise the alarm before it's too late but we also don't want to be accused of crying wolf."