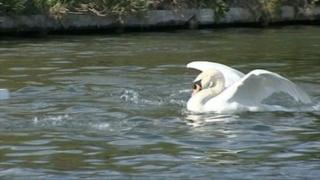 This may look like a regular swan but this bird has a beak with bite!

He's been causing chaos on the River Cam in Cambridge with his bad temper.

Local rowers have reported being attacked by the swan, who they've nicknamed Mr Asbo.

He's become such a big problem that local officials have now decided to move him, his mate and their cygnets to protect river users during a rowing race!

Conservation workers are hoping they can lure the swan and his family into a quieter stretch of water by getting him to follow a motor boat before each race.

They are worried that the swan could get more aggressive during the races because he might see all the boats as a threat to his cygnets.

The RSPCA reckon that it is common for swans to display angry behaviour if they think that their young might be in danger.

If the motor boat doesn't work, a local resident has agreed to look after the swan family in his garden during the races to make sure the rowers and the birds stay safe.