Chat: What do you think of badger culling? 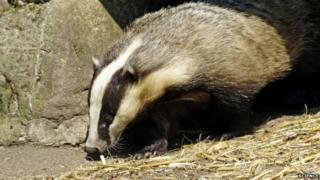 The government's given its backing for culling badgers in parts of England.

If it goes ahead, it'll be done as pilot schemes to begin with, which means they're small trials to see if it works.

Culling is controlling the number of animals in a population by killing some of them.

Lots of farmers want a badger cull in south-west England because the animals carry a disease, tuberculosis, that's bad for cattle - it's killed thousands of cows in the last few years.

But campaigners say killing badgers won't improve things that much for cattle and that vaccinations could be the way forward.

A similar plan for badger culling was agreed in Wales, but then got dropped.

This page is closed now but you can read your comments below.

"It's unbelievable! Why should badgers be less important that cows?! I hate the idea. Even if killing badgers does stop the spread of TB, it will also let the insect population grow as badgers eat insects."

"I, being very fond of British wildlife, think that it's crazy to cull badgers. It's unlikely that they even spread TB! Badgers have a goverment protection act so why should we start killing them now?"

"I think it's ABSOLUTELY AWFUL! They should just vaccinate the cows!"

"I like animals. How do they know it's actually going to work? It should be banned. Why can't they vaccinate the cattle?"

"I think people should just find a way to stop the disease."

"It depends how many badgers there are."

"It's not fair on the badgers, people should find a way to cure cows of TB."

"Badgers are part of nature and the food chain. Badgers eat insects so if they are killed then the insect population will grow and spread across the UK, all the crops will be eaten and food will be scarce. Killing badgers must be banned!!"

"Killing badgers is a horrible idea. I love seeing badger tracks and setts near my house."

"It's cruel, barbaric and just plain stupid!! Badgers will move back into the areas where others are 'culled' so what's the point?"

"I think that it's horrid to kill badgers. How would we like it if badgers killed us because of us giving diseases to worms and snails?"

"I think badger culling is just cruel and it should be banned."