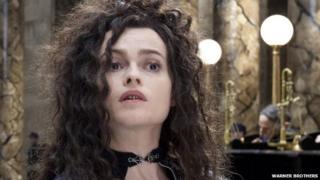 It's been smashing records this weekend - yes, it can only be the new Harry Potter film!

Have you seen Harry Potter and the Deathly Hallows Part 2 already? What did you think?

Was it the greatest ending ever to an amazing series? Or were you actually a bit disappointed?

Whatever you thought of the film, we want to hear it - send in your comments now...

"The perfect end for one of the most brilliant film and book series ever! I loved every single thing about it - it had me on the edge of my seat all the way through! Neville Longbottom was really different, much braver in this film, and was one of the best characters. This is one of the best of the films - action packed, exciting, and crackling with magic!"

"It was really good! You just need to think of it separately to the books."

"It was soooo sad! I started crying when Snape died and didn't stop crying until the end!! The cinema was absolutely silent and I was just sitting there crying and sniffing! I can't believe it's the last one!"

"I loved the movie - it was as good as all the other Harry Potter movies and books but in my opinion the ending could be better."

"Harry Potter was fantastically brilliant from start to finish. The end part was fantastic too especially when we saw them at platform nine & three quarter boarding the train to Hogwarts."

"It was the best adventure film ever."

"I went to see this film with my school and I sobbed at the end! Now it's gone I feel very upset and I want it back! I think this was one of the best films in the series."

"I thought it was amazing, especially the scenery at Hogwarts! My best bit was when they first saw Neville Longbottom coming out of Aberforth's painting!"

"It was amazing in 3D, it seemed like I was there! I almost cried at some parts because it was so sad. It was an incredible finish to an amazing series (but I secretly wish they would make a sequel for Harry's kid!)"

"Woah!! It's absolutely AMAZING. I would definitely recommend seeing it in 3D!!! I'm so sad it's over!"

"The ending was action packed! It was amazing."