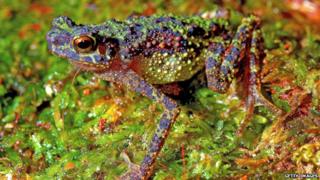 A colourful, spindly-legged toad that was thought to be extinct has been found again!

The Borneo rainbow toad hadn't been spotted since 1924. But after months of searching remote mountain forests on the island of Borneo in Asia, scientists found three of them up a tree.

Before this there weren't even any pictures of the toad - there were only pictures drawn from specimens collected in the 1920s.

One of the scientists who found the toad said it was a thrilling discovery.

But he's keeping the exact location of the find a secret - to protect the toads from collectors who want them for the pet trade.