Scientists discover the secret to how penguins leap 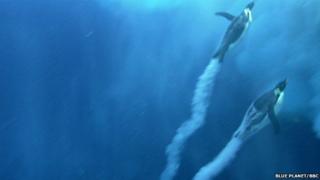 We all know that penguins have happy feet - but scientists now reckon they've discovered the secret behind how penguins can fly into the air.

The animals can't use their wings to flap into flight like other birds, but that doesn't stop them from being able to leap in the air to escape from danger.

Experts have found out that they're able to wrap their bodies in a cloak of air bubbles which help them to fly fast out of the water.

Penguin feathers collect tiny bubbles when they're swimming, creating a layer of air around the animal which meams that they can swim fast enough to fly out of the sea and into the air! 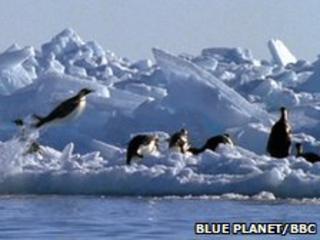 Scientists use the same technique when designing torpedoes and boats but didn't realise that penguins were using the same idea!

Smaller penguins like the Adelie can leap up to a huge 2-3 metres, but larger species like the Emperor can only propel themselves up to 45cm.

Scientists think that without the bubbles, the animals would have big problems getting out of the water because of their little bodies and big wings.

Experts reckon that the creatures' special talent is crucial in keeping them safe from predators.