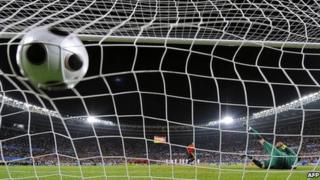 Penalty shoot-outs are never easy, but new research offers some top tips on how to beat the goalie... boot the ball to the right!

There's just one catch - it only works if your team is already winning!

A study of World Cup penalty shoot-outs from 1982 to 2010, found keepers usually had a 50-50 chance of going left or right to defend the goal.

But if their team was losing, they favoured diving to the right. It's all to do with the way our brains work.

The research team from the University of Amsterdam also carried out their own experiments to test their theory.

And they found that lots of our brains favour the right hand side in situations where the choice between left and right seems to be split equally.

"It's quite impressive," said co-author of the study Marieke Roskes. "Even in this really important situation, people are still influenced by biological factors."