Neptune - facts about planets in the solar system 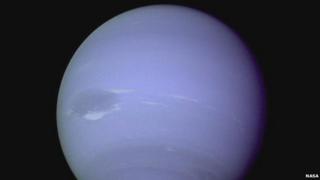 Neptune is the planet furthest away from the Sun and is made up of the same kinds of gases found on Uranus.

Methane is the gas that makes up most of the atmosphere on Neptune and gives it that dark blue colour.

Because it was so far away with such a slow orbit, when Galileo observed Neptune in 1613, he thought it was a star. It was finally discovered by two different mathematicians in 1846.

Neptune is the windiest planet with winds that can reach up to 1,240mph, which is three times faster than anything recorded on Earth.

It is 17 times bigger than Earth and takes 165 years to orbit the Sun. This means only one year on Neptune has passed since it was discovered in 1846 - happy birthday Neptune!

It has 11 moons with a 16-hour day but even though it is the planet furthest away from the Sun, it is not the coldest, with temperatures of -218°C.

What songs and dances can we expect in this week's Strictly?