Uranus - facts about planets in the solar system 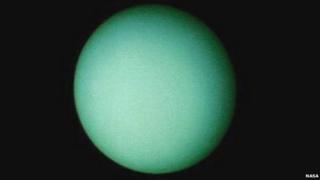 NASA
Uranus is the only planet to rotate on its side

Uranus is the third biggest planet in the solar system and the only planet that rotates on its side. Scientists think it may have been knocked over onto its side by another planet long ago.

This means that some parts of Uranus can't be reached by the Sun for long periods of time. Some nights can last as long as 40 Earth years there!

Uranus was the first planet to be discovered by a telescope by Sir William Hershel in 1781. Even though you could see it without a telescope, it hadn't been noticed before that time because it is quite dim and has a slow orbit.

The core of the planet is made up of ice and rock making it the coldest planet in the solar system with temperatures of -224°C, 32 times colder than the average on Earth!

It also has a complex layer of clouds made of water and other chemicals. Scientists have even discovered that Uranus has its own weather activity and seasons.

It has 27 moons and like Saturn, it also has a system of 11 rings orbiting it. They are very dim and difficult to see, but the brightest ring orbiting Uranus is called the Epsilon ring.