Saturn - facts about planets in the solar system 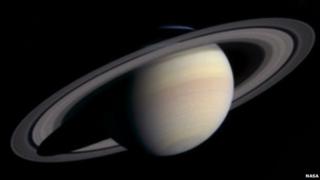 NASA
Saturn is easily identified as it has rings around it

Saturn is the second biggest planet in our solar system. Similar to Jupiter it has over 60 moons and is made up of different gases.

Even though it is a gas giant, it is also the lightest planet. Saturn is so light that it would float in water, if there was an ocean big enough.

Its most interesting feature is the series of rings that surround the planet. The rings aren't solid, but are made up of lots of little pieces of rock and ice particles that orbit Saturn at the same speed.

A day on Saturn is very short at only 11 Earth hours, but because it is so far from the Sun, 1 year is equal to almost 30 years on Earth!

Saturn is also very cold because of its distance from the Sun, 25 times colder than the average temperature on Earth at -175°C.