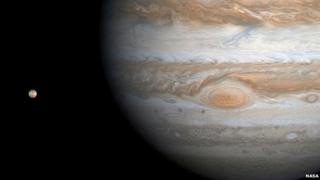 Jupiter is the largest planet in the solar system - it's so big you could fit over 1,300 Earths inside it!

It's also the fastest rotating planet too, with 1 day only lasting 10 hours - but a year on Jupiter lasts for 12 Earth years.

Jupiter doesn't have a solid surface and is made up of gas, giving it the name 'gas giant'.

It has winds that can travel up to 400mph that swirl around the planet giving it bands and stripes.

These coloured bands are called zones and belts. Each one has a slightly different temperature and holds different chemicals to make them different colours.

Its most famous feature is its 'Red Spot', which is a storm that's so big it is visible from Earth. It's been raging for 300 years!

Jupiter is the planet that has the most moons in the solar system. It has 4 main moons that were discovered by a famous astronomer called Galileo Galilei in 1610, but there are now thought to be up to 64 moons orbiting Jupiter.

Its biggest moon is called Ganymede, the largest moon in the solar system - which is bigger than Mercury!