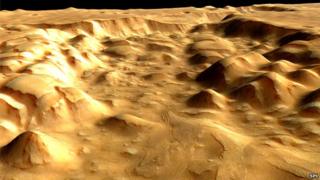 Mars is also known as the 'Red Planet' because it has lots of iron oxide on its surface giving it that rusty red colour.

It is the second-smallest planet in the system and fourth in line from the Sun meaning it can get pretty cold there.

Same as the Earth, it has a North and a South pole which are covered in ice, and reaching temperatures as low as -140°C.

20°C is the highest temperature on Mars, similar to a sunny day back here on Earth.

A day on Mars is slightly longer than here at 25 hours, but a Mars year is almost twice as long as an Earth year, taking 687 days to orbit the sun.