Venus - facts about planets in the solar system 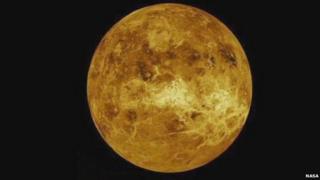 Venus is the brightest object in our solar system after the Sun and our Moon which means on a clear night you might be able to see it without using a telescope.

Because of this, people have known about its existence since prehistoric times and the first probe to visit it was in 1961.

Venus is sometimes called the 'Twin Planet' because it is similar to Earth. It's only slightly smaller than Earth and has an atmosphere complete with clouds.

These clouds are a bit more deadly than ours because they are made of sulphuric acid which is poisonous to us.

Acid clouds, mixed with an atmosphere of carbon dioxide, make Venus the hottest planet in the solar system reaching 482°C - that's almost 7 times higher than the hottest temperature ever recorded on Earth!

Venus also has the slowest rotation in the solar system meaning 1 day on Venus is the same as 243 days on Earth.

But for Venus to orbit the Sun takes just 224 Earth days, which means that a year on Venus is shorter than a day!