Mercury - facts about planets in the solar system 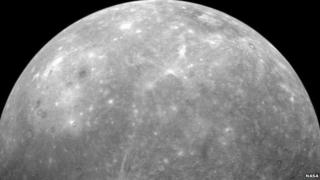 Mercury is the closest planet to the Sun but surprisingly, not the hottest. It doesn't have an atmosphere so any heat the planet gets from the Sun quickly escapes back into space.

Temperatures can still get as high as 427°C which is 61 times hotter than the average temperature on Earth!

But because there is nothing to hold in the heat, Mercury can also reach temperatures as low as -173°C, almost twice as cold as the lowest temperature ever recorded on Earth.

No atmosphere also means the planet doesn't have a sky! If you could visit Mercury, you would be able to see stars at daytime and the sun would look twice as big.

Because Mercury is the closest planet to the sun, it has a very quick orbit. This means it only takes 88 Earth days to go round the sun which gives Mercury an 88-day year.

But it rotates quite slowly and means that a day on Mercury lasts for 59 Earth days.

The first probe to reach Mercury was in 1974 and it mapped out the surface to find it was really similar to our moon with lots of craters.