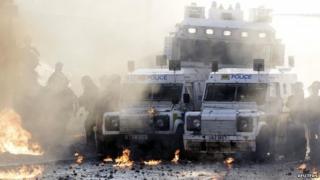 Another night of violence erupted in Belfast after one of the biggest days of Northern Ireland's marching season.

Petrol bombs and missiles were thrown at police amid trouble in Londonderry, Armagh and Ballymena.

During the marching season, thousands of people take part in parades to celebrate a Protestant victory against the Catholic King James II in 1690.

But this often leads to clashes with Catholic nationalists as they disagree over who should rule Northern Ireland.

Nationalists, who were rioting, want Northern Ireland to join the Republic of Ireland and form a united Ireland, while unionists who take part in the marches think it should be part of the UK.

From the 1970s to the 1990s, armed groups on both sides used violence to try to get their way. Thousands of people died in what became known as the Troubles.

In 1998, leaders on both sides agreed to work towards peace and now govern Northern Ireland together. But some people are worried that the violence is increasing again, despite most people wanting peace.

Last month, Belfast saw some of its worst riots for 10 years. But things are still much better than they were during the Troubles and there are lots of people who are determined to make fighting in Northern Ireland a thing of the past.