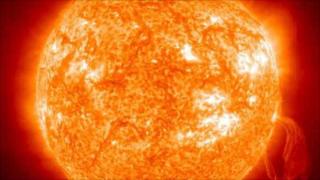 The Sun is at the centre of the Solar System, and its gravity holds all the planets in place.

The Sun is the biggest object in the Solar System and makes up 99% of its mass. Its diameter is around 109 times bigger than Earth, but you could fit over A MILLION Earths inside the Sun.

Astronomers think that the Sun (and the planets) formed from the solar nebula about 4.59 billion years ago, so it's pretty old!

The temperature of the sun isn't the same all over; in some places 'sun spots' occur where it isn't as hot as elsewhere.

It's made almost entirely of hydrogen, with a little helium and a few heavier gases including oxygen - and there's even some iron in there too.

Light from the Sun reaches the Earth in just 8 minutes!

Remember - don't ever look directly at the sun - you could seriously damage your eyes.