Northern Ireland: back on track 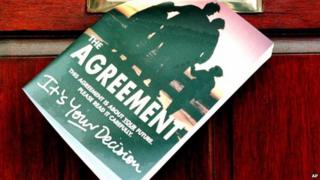 The British and Irish governments made several attempts to get power-sharing back on track after the 2002 breakdown.

Finally, in October 2006, something called the St Andrews Agreement was made - setting up a timetable for getting a power-sharing government going again.

Political parties agreed to back down on certain issues and elections to choose the Assembly's representatives were held.

Ian Paisley and Gerry Adams - the leaders of the two biggest parties who have very different political views - agreed to a power-sharing deal, naming 8 May 2007 as the date when devolution would return to Northern Ireland.