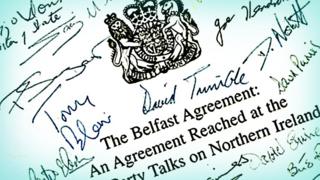 It's been 20 years since an important moment in the history of Northern Ireland.

On 10 April 1998, something called the Good Friday Agreement (or Belfast Agreement) was signed. This agreement helped to bring to an end a period of conflict in the region called the Troubles.

The Troubles was a period when there was a lot of violence between two groups - Republicans and Loyalists. Many people were killed in the fighting.

But where did this fighting come from in the first place and how did it lead to the Good Friday Agreement?

What were the Troubles?

The conflict in Northern Ireland dates back to when it became separated from the rest of Ireland in the early 1920s.

Great Britain had ruled Ireland for hundreds of years, but it split off from British rule - leaving Northern Ireland as part of the UK, and the Republic of Ireland as a separate country. 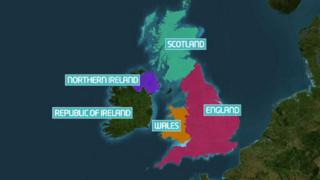 Northern Ireland (in purple) is part of the UK - with England, Wales and Scotland - while the Republic of Ireland is a separate country

When this happened, the population of Northern Ireland was divided in two:

Catholics were finding it difficult to get homes and jobs, and they protested against this. The Unionist community held their own protests in response.

During the 1960s, the tension between the two sides turned violent, resulting in a period known as the Troubles. 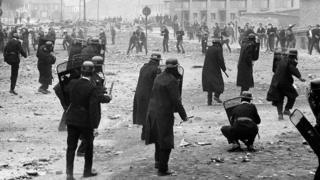 PA
This photo shows police fighting with rioters in 1969, in the area of Londonderry

From the 1970s to the 1990s, there was a lot of fighting between armed groups on both sides and many people died in the violence.

In order to deal with the conflict, British troops were sent to the area, but they came into conflict with Republican armed groups, the largest of which was the Irish Republican Army (IRA). 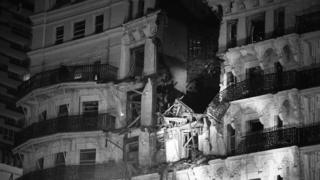 PA
This picture shows the damage to a hotel in Brighton in 1984, after the IRA set off a bomb to try to kill the UK's prime minister at the time, Margaret Thatcher

They included groups like the Ulster Defence Association (UDA) and the Ulster Volunteer Force (UVF). Both the Republican and Loyalist gangs were responsible for many killings.

The IRA in particular targeted the police and soldiers from the British army who patrolled the streets. The situation became much worse in 1972, when 14 people were killed by British troops during a peaceful civil rights march led by Catholics and Republicans in Londonderry.

This day became known as Bloody Sunday and for years afterwards many doubted that it would be possible to bring peace to Northern Ireland.

How did the agreement come about?

After years of fighting, the 1990s saw a change in the region, as the IRA announced it would stop the bombings and shootings.

This gave the Unionists and Nationalists the opportunity to try to sort out their problems.

It was not an easy process, and other countries got involved to help the two sides to reach a deal.

In 1998 - after nearly two years of talks and 30 years of conflict - the Good Friday agreement was signed. This resulted in a new government being formed that would see power being shared between Unionists and Nationalists. 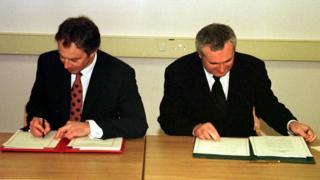 The idea of the agreement was to get the two sides to work together in a group called the Northern Ireland Assembly. The Assembly would make some decisions that were previously made by the UK government in London.

Giving power to a region like this is known as devolution. 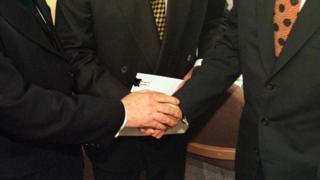 At 5.30pm on Friday 10 April 1998, an American politician called George Mitchell - who was leading the talks - stated: "I am pleased to announce that the two governments and the political parties in Northern Ireland have reached agreement."

What happened after this?

A copy of the agreement was posted to every house in Northern Ireland and the Republic of Ireland for people to read, before a referendum was held when they could vote on it.

In May 1998, adults in Northern Ireland and the Republic of Ireland voted in favour of the Good Friday Agreement, which made it official - and the Northern Ireland Assembly took their seats in December of that year. 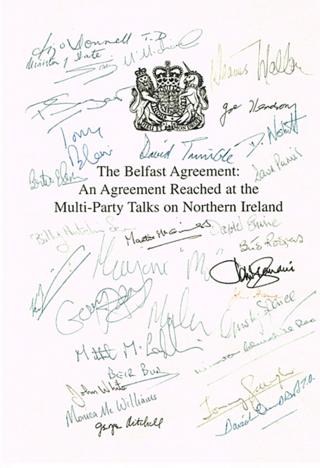 Whytes
The front cover of the Good Friday Agreement, signed by the participants

But this didn't completely bring an end to Northern Ireland's problems.

There were allegations of spying and some of the political parties said they couldn't work with each other. Some people opposed to this peace process also continued to be violent.

In 2002, the Northern Ireland Assembly was suspended and its decision-making duties were returned to the UK government.

Five years later, the Assembly was given back power and in 2007, the British army officially ended its operations in Northern Ireland.

However, in January 2017, the deal between the main parties in Northern Ireland collapsed - and it has yet to be restored. 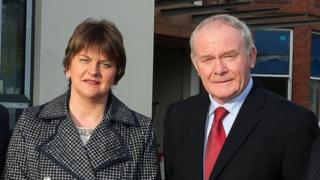 Even though they belonged to different political parties, Northern Ireland's First Minister Arlene Foster (on the left) and Deputy First Minister Martin McGuinness - who passed away in March 2017 - worked together as leaders of Northern Ireland, before the arrangement where they shared power collapsed in January 2017

The region's political parties still disagree and are locked in a stand-off with each other. Many people hope that a peaceful, power-sharing arrangement can be reached again soon.

Although the politicians continue to disagree, there has been no return to the violence once seen in Northern Ireland. It is a much more peaceful place and many say that's because of the Good Friday Agreement.

Martin McGuinness: Why was this man so important to Northern Ireland?

Gay marriage in Northern Ireland: We find out what the argument is