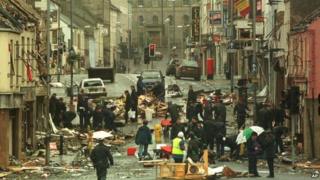 After the island was split, there were fewer Catholics in Northern Ireland.

They were finding it difficult to get homes and jobs, so they held protests.

The Loyalist community held their own protests in response.

Even before this, the different views of both sides of the community was a long-standing problem, so there was a lot for people to get annoyed about.

British troops were sent in to deal with the problem, but they soon came into conflict with an armed group who wanted a totally independent Ireland - the Irish Republican Army (IRA).

It led to armed Loyalist groups attacking the Catholic community.

From the 1970s to the 1990s, armed groups on both sides held violent campaigns.

Thousands of people died. The conflict is known as the Troubles.