The history of Northern Ireland 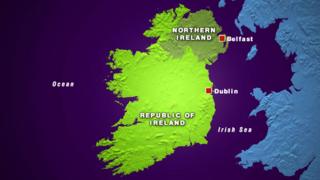 For hundreds of years, Ireland was ruled by its next door neighbour - Great Britain.

Many people objected to being ruled by Britain.

In 1922, most of the island became independent from Britain. This became the Republic of Ireland.

But in the north, six counties remained under British rule and became part of the United Kingdom of Great Britain and Northern Ireland.

Some people were unhappy about this and it led to lots of problems in Northern Ireland.