Unique pig-nosed turtles are in danger of disappearing 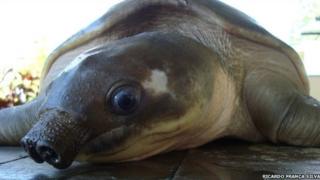 Pig-nosed turtles are in danger of disappearing, researchers have found.

There's been a big fall in numbers over the past 30 years - mainly because people in Papua New Guinea use the turtles for eggs and meat.

They might not be the cutest animals out there, but scientists want to protect them because they're unique and unusual.

The pig-nosed turtle has no close relatives and can only be found in two places in the entire world.

But protecting the turtles is a tricky job. It will be difficult to ban villagers from harvesting them because many rely on the turtles as a source of food to survive.

So scientists are hoping they can find a way to save the turtles that will not affect the local people.

But whatever plan they come up with, it will take years for numbers of the pig-nosed turtle to recover.