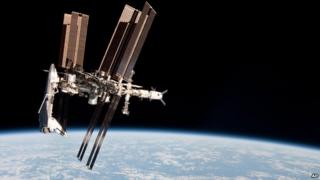 This incredible image is the first ever picture of a US space shuttle docked at the International Space Station (ISS).

It was taken by an Italian astronaut who was in a Russian space craft that was leaving the space station.

The photo shows Endeavour, the US space shuttle that landed back on Earth for the last time on June 1.

At the time it was taken Endeavour was docked at the ISS, moving across the surface of the Earth at 17,000mph and at an altitude of around 220 miles.

The reason there has never been a photo like this before is because, for safety reasons, one space craft is never normally moving around while another shuttle is docked.

Endeavour touched down at the Kennedy Space Centre in the American state of Florida on June 1, ending its 19-year career.

In that time, Endeavour flew 25 missions and travelled more than 122 million miles! It will now be put on display in a museum.

There's now just one more shuttle left, called Atlantis. It's set to launch on its last mission in July 2011.

Endeavor first took off back in 1992, and since then has spent nearly three hundred days in space.

NASA, the American organisation that run the space missions, is retiring all it's shuttles because they are too expensive.

As Endeavour landed, mission control radioed in a special message to the shuttle.

"Your landing ends a vibrant legacy for this amazing vehicle that will long be remembered. Welcome home, Endeavour," they said.