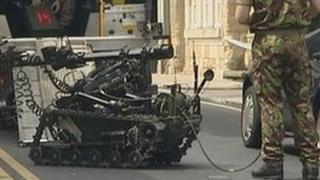 A box used for the worldwide online treasure hunt game, geocaching, has been mistaken for a bomb in West Yorkshire.

Coffee shop owner Karen Brittain called the police after she saw a man fumbling with a plastic box.

He hid it it under a bin on the street and walked away quickly, talking on his mobile phone.

She called the police who sealed off the area and evacuated the whole street.

They brought in bomb disposal experts who used special robots to destroy what everybody assumed was a bomb.

In fact, it was all part of an online trend that's been around for a while now called geocaching.

The geocacher wasn't punished by the police, but he was told not to hide things in suspicious places.

Geocaching is a game where you hide stuff for other people to find it.

Because of GPS (global positioning system) technology, this kind of a treasure hunt can be worldwide and can spread quickly online.

Most 'caches' look like a small sealed plastic box.

Inside there's usually a logbook and sometimes a small present gift.

Whoever hides it puts its location online, but only in GPS co-ordinates and often a cryptic clue. It means the hiding place can be pretty tricky to find.

It's a real life treasure hunt that anyone with a computer can join.

The hider records the box's location online, but only in the form of GPS co-ordinates and perhaps a cryptic clue. The precise hiding place can often be very tricky to find.