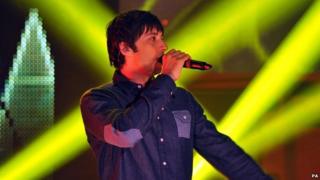 Lots of change in the charts this week with Example taking number one in the singles chart and the Arctic Monkeys going straight in at the top spot of the album chart.

The Arctic Monkeys' Suck It And See toppled Lady Gaga's Born This Way from the top to number three.

Adele's album 21 stayed at number two, and 19 slipped from three to five.

American Britain's Got Talent star Jackie Evancho, 11, came in at number four with Dream With Me.

British singer and rapper Example took the top spot from Pitbull's Give Me Everything, featuring Ne-Yo, Afrojack and Nayer, which had three weeks at the top.

Nicole Scherzinger's Right There moved up from 14 to three, while Mr Saxobeat by Alexandra Stan fell from three to four.

Unusually there's a classical music piece in the top 40. Ludovico Einaudi's solo piano piece I Giorni rose from 195 to 32, thanks to BBC Radio 1 DJ Greg James playing it every day for students taking exams to revise to!