Nine people rescued from a rollercoaster in Lanarkshire 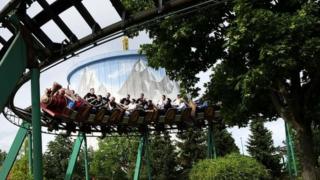 AFP
This is an example of a rollercoaster

Nine people were rescued from a rollercoaster after being trapped for hours on the ride in Strathclyde Park.

Fire crews were called to M&Ds in Lanarkshire after the ride got stuck on Sunday afternoon.

The youngest person in the group was nine-years-old.

They were stranded about 18 metres above the ground.

Strathclyde Police said: "Nine people of various ages were on the ride.

"Strathclyde Police and other emergency services were sent to the scene.

"Everybody is now safe and well. No-one needed to be taken to hospital."