Dinosaurs used to head-butt each other! 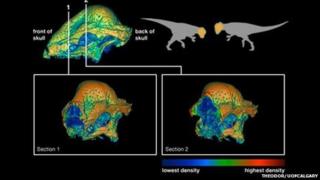 Scientists in Canada reckon a species of dinosaur used to settle arguments - by head-butting each other!

It was usually the males fighting over their girlfriends who practiced the butting technique.

Stegoceras would use their domed skulls to ram into one another, and the winner would get the pick of the female companions.

The Stegoceras roamed the Earth a massive 70 million years ago.

And scientists believe that if they were around now, they would beat any modern-day animal at a head-butt fight.

The research was published in science magazine PLoS ONE.