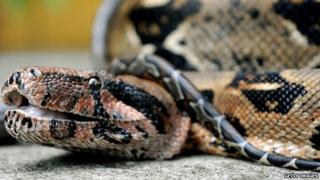 Getty Images
A boa snake like the one that escaped

Police have told people in Suffolk to keep kids and pets indoors after a 2.3m snake escaped from its tank.

The female boa constrictor, called Diva, isn't poisonous but she is known to be unfriendly and might bite.

She went missing from her home in Broom Crescent, Ipswich, on Wednesday morning.

Her owner said that Diva was last fed three weeks ago so would be hungry and might try to hunt small animals, such as mice and rats. 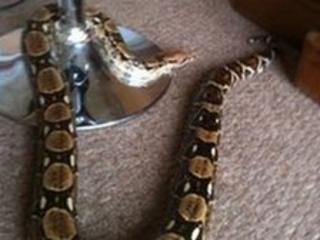 PA
A photo of Diva the missing snake

A police spokesman said: "The snake is nocturnal and is likely to hunt at night and will bask in the warm grass or on rocks in the sun during the day.

"It will hide, for example, under sheds when not hunting or warming."

Boa constrictors are found in tropical forests in South America. They kill their prey by wrapping themselves around it and squeezing it.