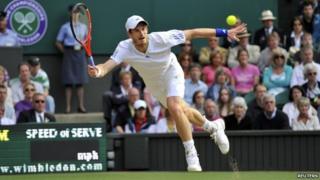 Andy Murray is through to the Wimbledon semi-finals for the third year running.

The British number one beat Feliciano Lopez from Spain in three sets. Andy made it look pretty easy and didn't lose any games on his serve during the 6-3 6-4 6-4 win.

Prince William's sister-in-law Pippa Middleton was one of the many Murray fans cheering on the Scot as he raced to victory in just over two hours.

Andy will play world number one Rafael Nadal in the semi-finals.

Nadal beat him in the semis last year so Andy will be hoping for revenge this time.

Nadal wasn't at his best but still managed to see off American Mardy Fish in four sets in their quarter-final.

There was a massive shock earlier in the day when the six-time Wimbledon champion Roger Federer went out, beaten by Frenchman Jo-Wilfried Tsonga.