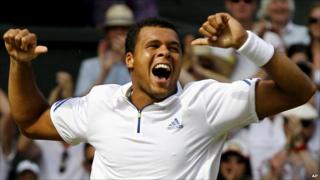 Six-time Wimbledon champion Roger Federer is out of the 2011 tournament, beaten by Frenchman Jo-Wilfried Tsonga.

All was looking good for Roger as he won the first two sets.

But Tsonga kept fighting, thrilling the crowd on Centre Court with some amazing shots, to win three sets in a row.

In the other men's quarter-final to play first on Court One, second seed Novak Djokovic survived a real scare from the young Australian Bernard Tomic.

After Djokovic took the first set, Tomic fought back to level at a set apiece - and then got an early break in the third.

Tomic is only 18 and is the first qualifier to make it to the Wimbledon quarter-finals since Vladimir Voltchkov in 2000.

In his fantastic run at the 2011 tournament, the German-born Aussie knocked out 29th seed Nikolay Davydenko in the first round, as well as fifth seed Robin Soderling.