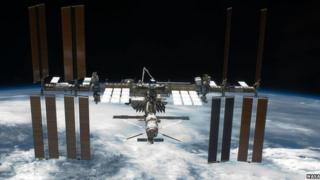 Six astronauts on the International Space Station (ISS) had to to prepare for an emergency evacuation back to Earth when a piece of flying space junk looked set to hit.

Luckily the rubbish passed by, but came within 350m of the space station, which is the closest an object has ever come to it.

Experts warned that even a small object could have caused loads of damage.

The rubbish includes old bits of rockets and broken bits of satellites.

The space crew closed all hatches on the ISS, boarded the small Soyuz spacecraft - the space equivalent of a lifeboat - and got ready to return to Earth in case the space junk badly damaged the station.

Once the rubbish passed safely by the ISS, the crew - three Russians, two Americans and a Japanese astronaut - returned to work as normal.