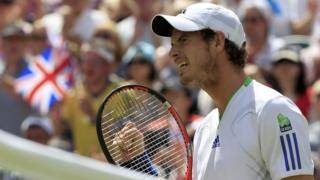 Andy Murray beat Richard Gasquet in straight sets to reach the quarter-finals at Wimbledon for the fourth year in a row.

People thought that his French opponent was going to be a tough challenge but Murray played some great tennis to get through with ease.

The first set was the toughest for the Scotsman, and it needed a tie-break to separate the players.

But Andy won the tie break 7-3 and the next two sets were pretty easy for him.

At the end of the match, with the final score 7-6 (7-3) 6-3 6-2, the British number one gave a little bow to the royal box on Centre Court, where the Duke and Duchess of Cambridge were applauding his performance.

Murray will now play Spain's Feliciano Lopez in the quarter-final on Wednesday.

Have your say: Should there be a World Cup every two years?