Your predictions - who will win Wimbledon 2011? 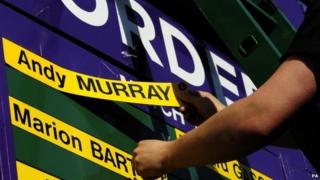 It's that time of year again when tennis madness descends on the UK as we host the Wimbledon tennis championship.

Tennis pundits are all over our screens giving their opinions on which player is on best form and who they predict as the winners.

But we wanted to know who YOU thought would win - and you told us!

"Andy Murray is on fire! If he has one of his days he can beat Nadal in straight sets. You can't miss a moment of Wimbledon this year! For Britain! Andy Murray!"

"Maria Sharapova is playing well this year at Wimbledon, who knows- she might be striking even harder and the William sisters are gone!"

"Murray will win as his defence is on fire!!"

"Nadal vs Federer in the final and Nadal will win!"

"I thought Roger Federer would win but he's hurt his ankle so either Andy Murray or Gasquet.

"Muzza will do it! For the glory, for the liberty, for the cake!!!"

"I think either Rafael Nadal or Andy Murray. Nadal maybe because he is an excellent tennis player, but perhaps Murray because he's been playing surprisingly well recently."

"I really want Andy Murray to win, though I have a feeling Roger Federer will :( But in the women's tennis it will be Maria Sharapova... for sure!!!"

"It'll be Nadal or Federer or possibly Djokovic. Murray has been playing well but I don't think he's quite good enough to beat those three yet."

"Nadal, Murray or Djokovic. Semi-finals will be Nadal vs Murray (that game ALWAYS seems to happen in a grand slam semi!), Djokovic vs Federer or Lopez or Tsonga. Hopefully Muzza can win."

"I think Andy Murray is going to win because he has great talent. GOOD LUCK ANDY MURRAY!"

"I think Andy Murray can win Wimbledon this year because he is a good tennis player and can focus."

"I think Andy Murray will win because he's such a good tennis player!"

"Federer will win I'm sure!"

"I think Federer will win Wimbledon as I have always been inspired by him and supported him. I think that Nadal, Djokovic and Roddick all have a good chance but.... COME ON FEDERER!"

"I want Serena Williams to win!"

"It would be great if Andy Murray won, but I think Nadal will win!"

"I think Andy Roddick will win because he is a strong player with a very powerful serve."

"I think Rafa Nadal will win because he's number one and I have to be honest.... he's the best player. I think Murray will go close though."

"I think it's about time a British woman won!"

"Nadal because he won it last year!"

"I think it is a pretty open competition but of course I hope Andy Murray does well!"

"Andy Murray's got to win! Since he's from Scotland I think he should win! I look up to him when I play tennis."

"Rafael Nadal, all the way!"

"I think that Andy Murray will win!"

"Andy Murray should win because he is by far the best player!"

"Andy Murray all the way!"

"I think Andy Murray will win because he has been getting better and better as he goes along! So I think he has a chance this year!"