Can we predict when a volcano is going to erupt? 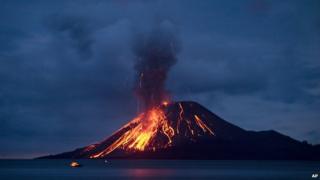 Scientists who specialise in volcanoes are called volcanologists. They are growing more and more confident at predicting when volcanoes will erupt in the short-term.

The further a volcano is from erupting, the harder it is to predict. Working out if a volcano will erupt in future years is still impossible.

Volcanologists combine several techniques to predict what will happen.

They use monitors to detect movement in the rocks that make up the volcano and in the earth's crust. They also measure the gases that come out of the volcanic mountains, and even the angle of the slopes.

If an eruption is likely to happen very soon the the behaviour of animals in the area can be a clue.

Animals often seem to be able to 'detect' when an eruption is coming, and they become agitated and worried.

And volcanologists are always trying to find new ways to detect eruptions. Some are now using satellites to try to understand how and when they may blow.