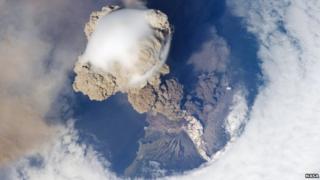 In some special places under the Earth's crust, there is red-hot molten rock, called magma.

Volcanoes happen when magma rises to the surface of the Earth, which causes bubbles of gas to appear in it.

This gas can cause pressure to build up in the mountain, and it eventually explodes. When the magma bursts out of the Earth, it is called lava.