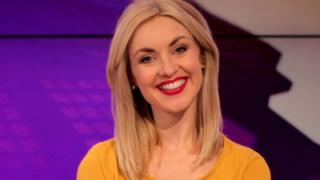 Hayley Hassall is one of Newsround's presenters.

Want to know more about her? Then read on...

I have a brother who's called Adam.

I love dancing and painting. I also regularly do a soup run for the homeless and like performing in plays and taking long walks in the countryside.

Blue and red. I like them both equally but if I had to go for one, then it would be red as it reminds me of Christmas.

Hats, hats and more hats. You can never have enough hats, especially in rainy Britain!

The Mekkits are a pop/ska band from Manchester, they play songs about surfing, going to the zoo and environmental concerns.

But the best band in the world is The Beatles!

How would you spend your perfect Sunday afternoon?

I would wake up to the smell of my mum's cooked breakfast, which usually consists of three massive courses. Then I would watch some TV and play with my dog. Then I would go for a long walk in the country, ideally by a river.

What are you scared of?

I'm not scared of anything… I'm Northern and well 'ard!

What makes you laugh?

Being silly with my friends makes me laugh a lot. But also my dad and uncle when they get together are the funniest men on the planet... honestly.

What other jobs have you had?

When I was at school I worked at Woolworths on the pick 'n' mix counter, I was also a Scout leader and I taught cycling proficiency in schools for a bit.

Then I worked for the European Union in Brussels for a year, where I was writing about charity and philanthropy issues in Europe.

Since then you may have seen me on Panorama or The One Show on BBC1.

I think Wales is the most beautiful country but I like going to Europe for the sunshine.

I remember reporting on the world record attempt by Kevin Alderton as he attempted to do the fastest straight run ski even though he is completely blind. Kevin is an amazing man and watching him conquer his fears to set the record was amazing.

I've also had to jump out of a plane at 21,000 feet with a camera strapped to my head to film a charity skydive. It was very scary but I will never forget it!

I have won two Royal Television Society Awards for a documentary I made about the shortage of midwives in hospitals.

After this documentary many hospitals improved their facilities, getting more staff and more equipment which made me very happy as it meant that the film I had made was actually making a difference.

What makes a good NR story?

A good NR story I think has to have fun and friendly reporters talking about some very important issues.

I like Newsround stories the most because they are the stories that matter. Whether it be about an earthquake or a new species being discovered, Newsround will tell you about it when sometimes the other news doesn't.

Any advice to children who want to get into journalism?

I would advise anyone who wants to be a journalist to start early. I volunteered at my local radio station when I was still at school and I always wrote for my school newspaper and magazine.

What makes you happy?

Chocolate and hanging out with my best friends makes me very happy!

I couldn't live without my TV or radio, I like them on all the time and I can often be found singing away to the radio whilst watching the TV