Two students, aged 16 and 14, have been killed and three others injured by a gunman who opened fire at a secondary school in California, officials say.

The victims died in a brief, 16-second gun attack shortly before classes began on Thursday at Saugus High School in Santa Clarita, north of Los Angeles.

The attack came on the 16th birthday of the suspect, named by US media as fellow student, Nathaniel Berhow.

The suspect then shot himself in the head and died several hours later.

No motive has been established so far, with police saying the attacks "still remains a mystery".

Students and teachers spoke of how they barricaded themselves in classrooms amid chaotic scenes, carrying out an active shooter drill that many schools have implemented in recent years following deadly attacks around the country.

What do we know about the shooting?

It was first reported at 07:38 local time (15:38 GMT) on Thursday, LA county sheriff Alex Villanueva said, adding that police were at the scene within two minutes.

The suspect was standing in the school courtyard when he took a .45-calibre semi-automatic pistol from his backpack and opened fire for about 16 seconds before turning the gun on himself, Sheriff's Captain Kent Wegener said.

"He just fires from where he is. He doesn't chase anybody. He doesn't move," Capt Wegener said.

Students barricaded themselves in classrooms under an active shooter drill for more than an hour as police tried to determine if the gunman was still at large.

Officers found six people suffering from gunshot wounds and transferred them to local hospitals. The suspect was later identified as one of those injured.

What do we know of the victims?

The names of those who died have not yet been released. They were a 16-year-old girl and a 14-year-old boy.

The three injured, also as-yet unnamed, were two girls, aged 14 and 15, and a 14-year-old boy. They are all in a stable condition.

The suspect had no known connection to the victims, Capt Wegener said.

What has been revealed about the gunman?

The attack came on the suspect's 16th birthday. 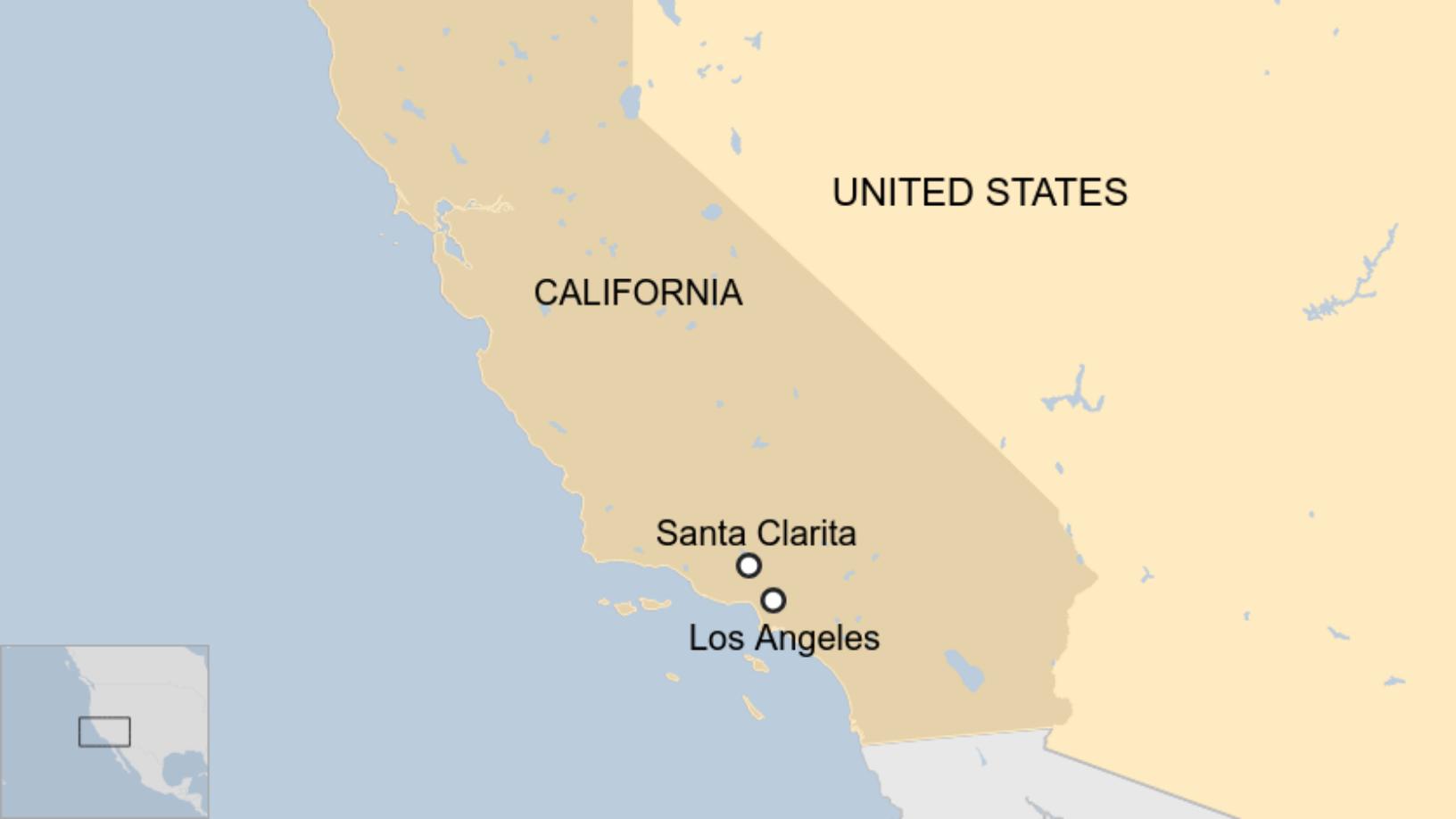 The FBI said it appeared he had acted alone and was not affiliated with any particular group or ideology.

The Associated Press quoted a fellow student, Brooke Risley, as saying the suspect was introverted but "naturally smart", adding that he had a girlfriend and was a boy scout.

AP said the boy lived locally in a modest home, and that his father died two years ago. A neighbour told Reuters the boy had struggled with his father's death.

Investigators have searched the home and interviewed the boy's mother and girlfriend.

There were no initial indications that he had been bullied at school.

There were reports of an Instagram posting saying "Saugus have fun at school tomorrow", but it was later revealed the account was not owned by the suspect.

How did students and parents react?

One student told NBC she was doing her homework when people started running. "I was really, really scared. I was shaking," she said.

Another student, named as Azalea, told CBS she and her classmates had barricaded the classroom door with chairs. "It was just really scary, having everybody panic and call their parents, saying they love you."

Teacher Katie Holt told NBC she was huddled in her office with 30 students when a girl ran in saying she had been shot. Ms Holt dressed the injuries as best she could her with her gunshot-wound kit, with a fellow student applying pressure.

There were emotional reunions once the lockdown was lifted.

"She was saying, 'I feel guilty that I didn't stay and help the people who were shot,'" he said. "And that was the thing that made me break down in tears."

How much security is there at Saugus?

There are a number of security cameras but no metal detectors, and lockdown drills are held three times a year.

How have officials responded?

News of the attack emerged during a Senate debate on gun control legislation. Senator Richard Blumenthal, a Democrat, was arguing for gun control when he was given a note with the news.

"We are complicit if we fail to act," he said. "It is not just a political responsibility, it is a moral imperative."

Gun control, and the right to bear arms, is a divisive political issue in the US. About 40% of Americans say they own a gun or live in a household with one, according to a 2017 survey, and the rate of murder or manslaughter by firearm in the country is the highest in the developed world.

According to the Washington Post, more than 230,000 young people in the US have experienced gun violence at school since the Columbine High School massacre in Colorado in 1999.

The US journal Education Week has been listing school shootings since 2018. It says there have been 22 incidents that have resulted in death or injury so far in 2019.

There were 24 such incidents last year, it says, but the casualty toll was higher, at 114. That includes the 17 people killed in the deadliest incident - at Marjory Stoneman Douglas High School in Parkland, Florida, on Valentine's Day. 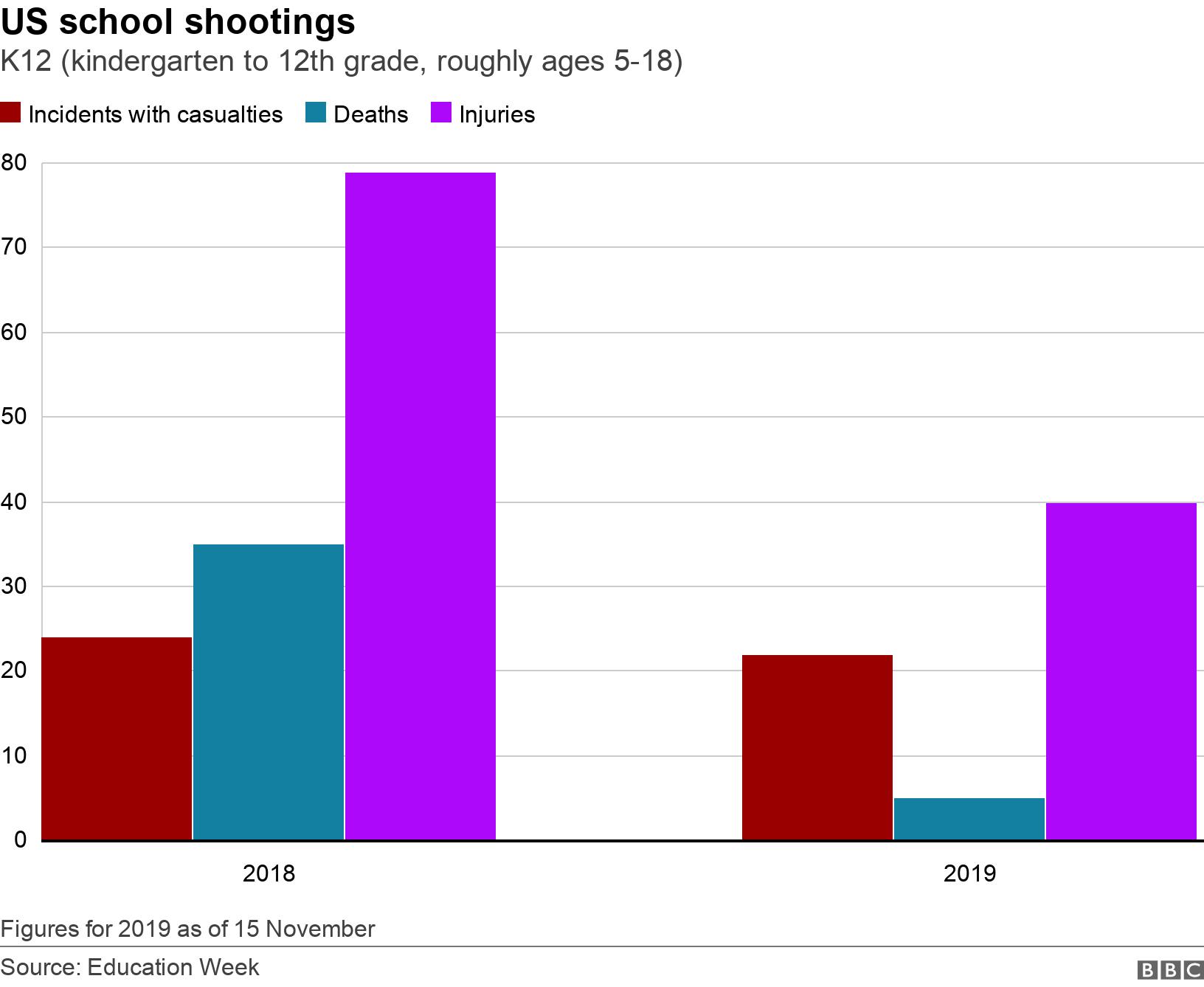 The Everytown gun control advocacy group, using separate methodology, said Saugus was the 85th incident of gunfire at a school this year, but that includes those where there were no casualties.