The Californian town of Paradise has been devastated by the deadliest wildfire in the state's history. At least 81 people have lost their lives and hundreds more have been reported missing. As families across the US come together for Thanksgiving, Paradise's residents are beginning to assess the damage to their lives and the town they called home.

When gale-force winds drove flames from the Camp Fire through dried-out scrub and trees into Paradise on 8 November, its people fled for their lives.

Some of the victims died trying to get away, while others were discovered in the burned-out ruins of their homes.

An estimated 13,000 homes were destroyed, with many of the town's mainly-wooden houses quickly reduced to ashes.

The authorities are still working to search and identify bodies as the fire continues to burn in the foothills of the Sierra Nevada.

While a forecast of heavy rains could help extinguish the flames, it could also hinder the search for the remains of victims and cause misery for those left homeless by the disaster. 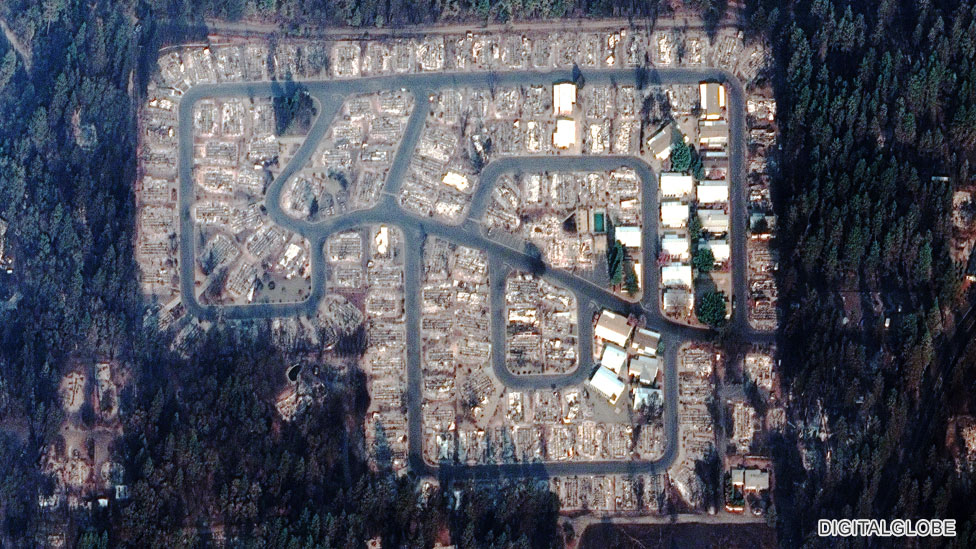 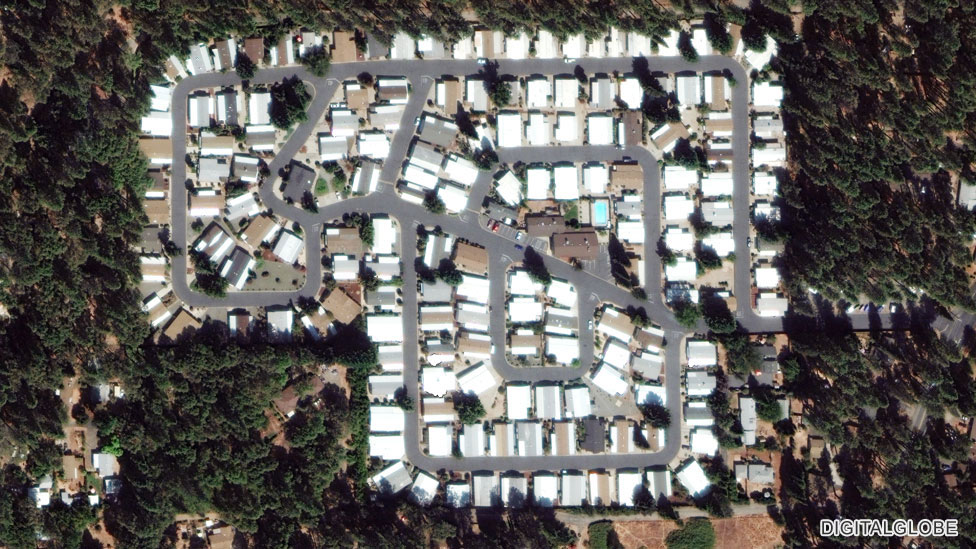 The Camp Fire scorched 152,000 acres of land along with the thousands of the homes built on it. The blaze is still only 75% contained.

The fire isn't expected to be fully under control until the end of the month, according to the California Department of Forestry and Fire Protection.

As the rest of America sits down to celebrate Thanksgiving on Thursday, those left homeless by the raging Camp Fire are contemplating their futures.

A number of organisations are on hand to help with the immediate crisis, providing shelter, clothes and food.

And for Thanksgiving itself, meals are being donated by several non-profit organisations - the day seen as a chance to bring together those affected to start the healing process.

For Kassy Parish, 19, such generosity after the trauma of the fire has been comforting.

She plans to spend Thanksgiving at her mother-in-law's, but a stranger has offered her twin sister, Alli, somewhere to sleep and invited her to join his family for the annual celebratory meal.

"It's brought out so much good in a lot of people in the area," said Kassy. "A lot of people have been getting together and making sure everyone is taken care of."

Kassy was staying with her mom and stepfather at their home on Skyway - one of the three main routes into Paradise - when the fire spread through the town. Their house was burned down. Her six siblings also lost their homes.

Before the disaster struck, the town was a popular retirement spot and, according to the latest census, about a quarter of the population was aged 65 or over.

Kassy worked as a personal carer providing support for adults in the town when they were unable to live independently.

She plans to stay in the town, where everyone knows everyone.

"I know it's going to take a couple of years until Paradise is rebuilt but I have lived here all my life," she said.

Although, there is no exact figure for the number of people left homeless, six official evacuation centres have been set up, including two in fairgrounds which had closed for the season. Some people have also taken refuge in tents or cars.

Hundreds of Red Cross volunteers are helping run the emergency shelters, which slept up to 950 on one night, as well as providing meals for all evacuees. They are also dealing with a fast-spreading norovirus outbreak, which has been reported at four of them.

The Red Cross is helping people search for those still missing, through their safe and well website.

Sean Smith, debris coordinator for the California Office of Emergency Services told Time magazine the post-fire clean-up would be the biggest since the 1906 San Francisco earthquake.

Along with the 13,000 homes destroyed, almost 500 businesses have also been hit.

"It's one of the worst disasters that I've seen in my career, hands down," Federal Emergency Management Agency administrator Brock Long told a news conference.

While federal funds are expected to provide about 75% of Paradise's recovery costs, the state of California will also contribute.

The money will help rebuild streets, public utilities and buildings and possibly install a new sewer system - Paradise was the largest town in California relying on septic tanks - but families without insurance may have to bear the cost of rebuilding their own homes.

Kassy and her family have set up a crowdfunding page to help them get back on their feet. Others are expected to do the same.

But for Maurine Johnson, who has lived in Paradise for more than 60 years, it is too soon to contemplate the future.

The 79-year-old great-great grandmother has lost her family home and her estate agency business, built up over many years with her late husband. Her two sons have also lost their homes.

She has experienced blazes before, but this one was different, she said.

"We have been through two or three fires up there and never felt threatened or worried."

Maurine, who fell over and broke her nose and damaged her teeth while visiting her sister-in-law at one of the evacuation centres, described how she fled her home with just one change of clothes and her mobile phone.

She admitted she still did not appreciate the gravity of her situation, but has been cheered by other people's generosity.

"I am having to wear donated clothes," she said. "It's a humbling experience when you are having to take from people."

It is this spirit of giving that has led many organisations to provide 15,000 Thanksgiving meals to Camp Fire survivors at several locations, including shelters, on Thursday.

Food for the Thanksgiving Together events will be provided by the non-profit World Central Kitchen and Sierra Nevada Brewing Co, while celebrity chefs will work side by side with Paradise restaurant owners to prepare the food.

"We have seen the power of food to bring communities together, especially in times of great need," reads a post on the World Central Kitchen website.

But the question for many of those affected by the Paradise fire, is whether they will return to the town.

Mayor of Paradise Jody Jones believes they will and that the town will be reborn.

But Maurine, who is considering winding up her estate agency business and retiring, fears many will not return. People are already moving on, she said.

"They are leaving the state - others won't be back."