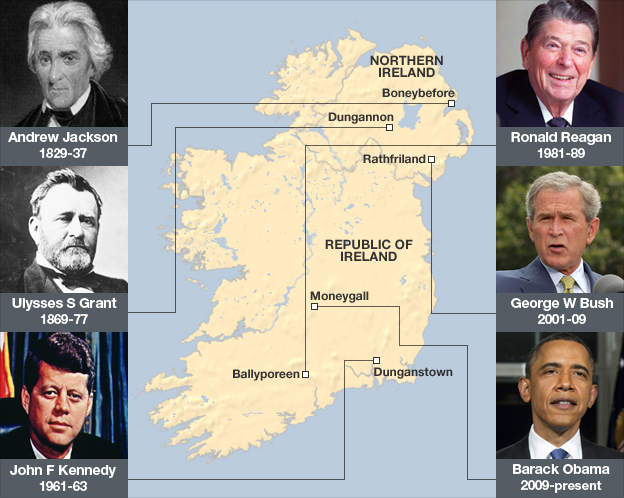 Parents from Boneybefore, nearr Carrickfergus, Co Antrim, where a heritage centre pays tribute to his legacy.

Visited his ancestral home in Dergenagh, Co Tyrone in 1878. It was the home of his maternal great-grandfather.

The most famous Irish American president, and the only Roman Catholic. His great-grandfather Patrick was from Dunganstown, Co Wexford.

His great-grandfather Michael Regan was born in Ballyporeen in Co Tipperary, in 1829. Reagan visited in 1984 and gave a speech there.

The Bush family has distant 18th Century ancestors in both Rathfriland, in Co Down, and Co Cork, although they never made much of these links.

Next month, Barack Obama will visit an Irish village where his great-great-great-great grandfather made shoes. He is thought to be the 22nd US president to have or claim Irish family, and most recent presidents have visited the Republic or Northern Ireland. Why?

A small village of fewer than 300 residents in County Offaly is about to welcome its most famous son.

Moneygall is gearing up for Obamamania on 23 or 24 May, when the president returns to the spot where in 1850 his ancestor Falmouth Kearney, son of shoemaker Joseph, packed his bags and headed off to the US.

Mr Obama's Irish connection, on his mother Ann Dunham's side, was unearthed in 2007 and the president announced the visit on St Patrick's Day this year.

Ever since President John F Kennedy was mobbed by crowds in Dunganstown, County Wexford, in 1963, nearly every president has beaten the same path across the Atlantic, often in an effort to seek out the ancestral home.

Ireland is the only country, apart perhaps from neighbours Mexico and Canada, so favoured. So how did it become such a magnet for leaders from the world's most powerful country?

"It's very simple, Catholic votes," says John Robert Greene, historian and author of dozens of books about US presidents.

"That's why there is a pilgrimage every four years and that's why Obama is going."

This will play beautifully in the Rust Belt, former steelmaking cities like Buffalo, Cleveland and Detroit, says Mr Greene, and also in New York City and in parts of Massachusetts. And it guarantees exposure in the Catholic newspapers, which aren't traditional Obama supporters because of his stance on abortion.

"I doubt he really wants to be photographed in a cottage like The Quiet Man, but he will," he says, referring to the 1952 film in which John Wayne returns to Ireland to reclaim his family farm in Innisfree.

Most of the early presidents' Irish connections were to Tyrone and Antrim, through the protestants who came from Ulster in the 18th Century and settled largely in the south and west.

They later labelled themselves as Scots-Irish, to distinguish themselves from the poor Catholics fleeing the potato famine in the decades following the 1840s.

In this period, the most traumatic in Irish history, there were few votes for a president who associated himself with the new arrivals who were accused of stealing American jobs.

Attitudes had changed by the early 20th Century, however, and then probably the most famous Irish-American of all, John F Kennedy, became president. Neither his parents or grandparents were Irish-born, but he successfully forged a cast-iron Irish identity, partly because he was the first Catholic to take the highest office.

Irish ballad Danny Boy rang out at Kennedy's political rallies and he mixed with prominent Irish Catholics like Tip O'Neill, who later became the second-longest serving House speaker in history.

Since Kennedy, every president apart from Gerald Ford has claimed some Irish ancestry, he says, although in Bill Clinton's case there was not any evidence of a connection.

One of the most rapturous visits was Ronald Reagan's to Ballyporeen in Tipperary in 1984, in which he spoke movingly about the connection he felt for the home of his great-grandfather, Michael Regan.

"He was real Irish in temperament," recalls Mary O'Farrell, who hosted the president and first lady in her pub. She had renamed one of the bars after him, which meant images of it adorned front pages around the world.

"You'd know he was Irish, he had that sense of humour and glint in his eye."

When presidents speak about their Irishness, they are only doing what millions of ordinary Americans do all the time, says Carl Shanahan, founder of Wild Geese, an organisation that promotes Irish culture in the US and worldwide.

"Being Irish doesn't hurt you at any level of society. We were never at war with Americans like the Germans, the Italians and the Japanese. In Washington's army the numbers were a third Irish or Scottish-Irish."

Polling evidence suggests it does help win votes, says Mr Shanahan, but it's not all about political calculation - there's a genuine love between the two countries, demonstrated by how many Americans view themselves as Irish, however remote the connection.

Although the power of the Irish vote is considered to be waning, there were 44 million self-identified Irish-Americans in the Census in 2000, plus 6-7 million Scottish-Irish, he says, many of whom have never set foot in the country.

"There is an affinity by association. It's the reputation of the Irish, the fighting Irish. A guy who gets off his feet and fights the battle and wins. We had boxing champs and baseball teams."

Mr Shanahan, who is trying to set up an Irish-American museum in Washington DC, says the Irish story is the story of America.

"We fought their wars, opened up their territories and built their cities. There's nowhere to tell that story and if we don't tell it, then people will forget."

One demonstration of this affection is the popularity of St Patrick's Day, a celebration that is older than the American nation itself. The first parade was held in 1766, in New York, 10 years before the Declaration of Independence.

There is a sentimentality about this American view of Ireland, Mr Shanahan concedes, because immigrant groups bring an old image of the mother country that remains fixed in time and space.

But for a country with the rags-to-riches fable so tightly woven into its fabric, an immigrant story that begins with a shoemaker in Moneygall and ends in the Oval Office is too tempting to ignore.