Despite his wealth and corporate success, Steve Jobs always managed to retain the air of a Silicon Valley buccaneer.

His abrasive style meant he was often difficult to work with but his eye for a desirable product made Apple one of the planet's most recognised brands.

His parents gave him up for adoption and he was taken in by a working class Californian couple Paul & Clara Jobs.

Months after his adoption, his biological parents married and had a daughter, Mona, who did not learn of her brother's existence until she was an adult.

He was brought up in his adoptive parent's home in Silicon Valley, the hub of the US electronics industry.

While attending a local high school the young Jobs was offered a summer job at the Hewlett Packard plant in Palo Alto where he found himself working alongside a fellow student named Steve Wozniak.

He dropped out of college after one term and went to work for the video game manufacturer Atari with the idea of raising enough money to travel to India.

Jobs returned from his trek around the sub continent with a shaven head, wearing Indian robes and having experienced the effects of LSD; he was to remain a Buddhist and vegetarian throughout his life.

He went back to work at Atari and joined a local computer club with his friend Steve Wozniak who was designing and building his own computer.

In 1976 Jobs pre-sold 50 of Wozniak's machines to a local computer store and, armed with a copy of the order, successfully persuaded an electronics distributor to let him have the components on credit.

He managed to launch the machine, called the Apple 1, without having borrowed any money or given up a share of the business to anyone else. 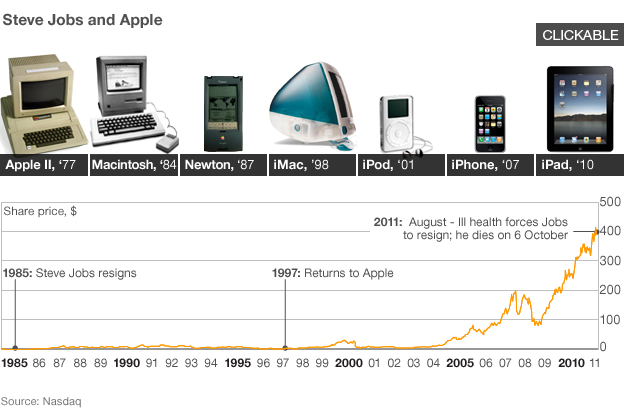 Although this was not Apple's first home computer, the Apple II was the company's breakthrough product. Its MOS 6502 processor ran at 1MHZ and was supported by a maximum 48K RAM. Original retail price: $1298 (£780).

At a time when PCs were using text-based command line interfaces, Apple pioneered the use of moveable windows. The Macintosh's single integrated processor and monitor design is still used in the iMac line of computers.

Produced during Steve Jobs' period of absence from the company. The Newton organiser is now recognised as having paved the way for the iPhone. Slightly ahead of its time, the Newton was not hugely popular.

Steve Jobs marked his return to Apple with the iMac line of computers. Remembered more for their radical looks than technical specs, the iMac's multi-coloured shells were created by British designer Jonathan Ive.

MP3 players had been around for a couple of years. Apple simply refined their design with a compact, elegant and now iconic while package. The first model only had a 5GB hard drive - enough for 1,000 songs, according to Apple.

Apple's entry into the mobile market had been long anticipated. Again, the company took existing technologies - such as the touch screen - refined them and added a touch of design flair. It sent shockwaves through the industry, still being felt today.

Steve Jobs revealed that development on the iPad started before work on the iPhone. It sparked a deluge of tablet products from almost every computer and mobile maker. But the iPad remains the top seller with around 60% market share.

He named the company after his favourite fruit which, either by chance or design ensured it appeared in phone book listings ahead of rival Atari.

The profit from the first Apple was ploughed back into an improved version, the Apple II, which appeared at a Californian computer fair in 1977.

Development of the new machine was expensive and Jobs persuaded Mike Markkula, a local investor, to guarantee a $250,000 loan and, together with Wozniak, the three formed the company Apple Computer.

The Apple II, unlike many other computers of the time, came complete and worked straight out of the box rather than the purchaser having to assemble the various parts.

But there were concerns at Apple about Jobs' lack of management experience and professional executives were hired to run the company.

One Apple board member claimed Jobs was "uncontrollable." "He got ideas in his head, and being a founder of the company, he went off and did them regardless of whether it ended up being good for the company."

Jobs introduced the Macintosh in 1984 to wild acclaim, but behind the hyped up launch there were financial problems at Apple.

A downturn in sales, and a growing resentment at what many employees saw as Jobs' autocratic style, resulted in an internal power struggle and he was ousted from the company.

By this time he had other irons in the fire. He founded NeXT Computer in 1985 and a year later bought Graphics Group from the Star Wars director, George Lucas.

The company, which Jobs renamed Pixar, produced extremely expensive computer animation hardware which was used by a number of film makers, including Disney.

The breakthrough came in 1995 with the film Toy Story, which went on to gross more than $350 million worldwide, and was followed by other successes including A Bug's Life, Finding Nemo and Monsters Inc.

A year later, Apple paid more than $400 million for NeXT computer and Jobs was back with the company he founded, wasting no time in removing Apple's then, Chief Executive Officer.

Jobs tackled Apple's poor profitability by dropping some fringe projects and moving the company into the burgeoning consumer electronics market.

The iPod, launched in 2001 satisfied the demand for music on the move and immediately became a style icon with its sleek design and distinctive white ear phones.

To drive his new machine Jobs also launched iTunes, allowing customers to download music from the internet and create their own play lists.

In 2003 Jobs was diagnosed with pancreatic cancer and, rejecting the idea of surgery, set about finding alternative therapy, including a special diet.

He finally underwent surgery in 2004 having kept his illness secret from all but a small handful of Apple insiders.

In 2005 Disney paid $7 billion worth of stock to buy Pixar from Jobs who, as a result, became the Walt Disney Company's biggest shareholder.

Two years later, at yet another much hyped launch, Jobs introduced the iPhone to a legion of customers, many of whom had queued for hours at their local Apple store.

In 2008 the ultra thin Macbook Air was launched with Jobs doing his usual stage presentation dressed in his habitual black turtle neck jumper and faded jeans.

His thin and somewhat gaunt appearance fuelled speculation that his illness had returned and it was announced, in early 2009, that he was taking a six month break to cope with what was described as a "hormonal imbalance."

In April of that year he underwent a liver transplant, with his doctors announcing that the prognosis was "excellent."

However, in Jan 2011, Apple announced that Jobs would taking a leave of absence for health reasons.

Unlike his contemporary, Microsoft's Bill Gates, Steve Jobs showed little inclination to use his personal wealth for philanthropic purposes.

And, strangely for a self-professed Buddhist, he did not embrace environmental concerns, with Apple coming under fire from Greenpeace for its reluctance to produce easily recyclable products.

Steve Jobs was a one off; a man who had total belief in his own abilities and a shortage of patience for anyone who failed to agree with him.

His great gifts were an ability to second guess the market and an eye for well designed and innovative products that everyone would buy.

"You can't just ask customers what they want and then try to give that to them," he once said. "By the time you get it built, they'll want something new."