Islamic State militants have stepped up their attacks on security forces in north-eastern Iraq, reportedly killing at least 18 people since the weekend.
Four tribal militia fighters and three soldiers died in three incidents in Salahuddin, Kirkuk and Diyala provinces on Monday night, security sources said.
Diyala also saw multiple attacks and clashes on Saturday and Sunday.
Analysts believe IS is taking advantage of the coronavirus pandemic, which is occupying the authorities' attention.
Politicians are also distracted by talks on the formation of a new government and the impact on the economy of the collapse in global oil prices.
At its height in 2014, IS controlled some 88,000sq km (34,000sq miles) of land stretching from western Syria to eastern Iraq, and imposed its brutal rule on almost eight million people.,
Iraqi pro-government forces declared victory against the jihadist group in late 2017, but several thousand militants are believed to be still active in the country.
Many have been hiding out in and mounting attacks from tunnel networks and caves in the Hamrin mountains, which straddle Diyala, Kirkuk and Salahuddin. 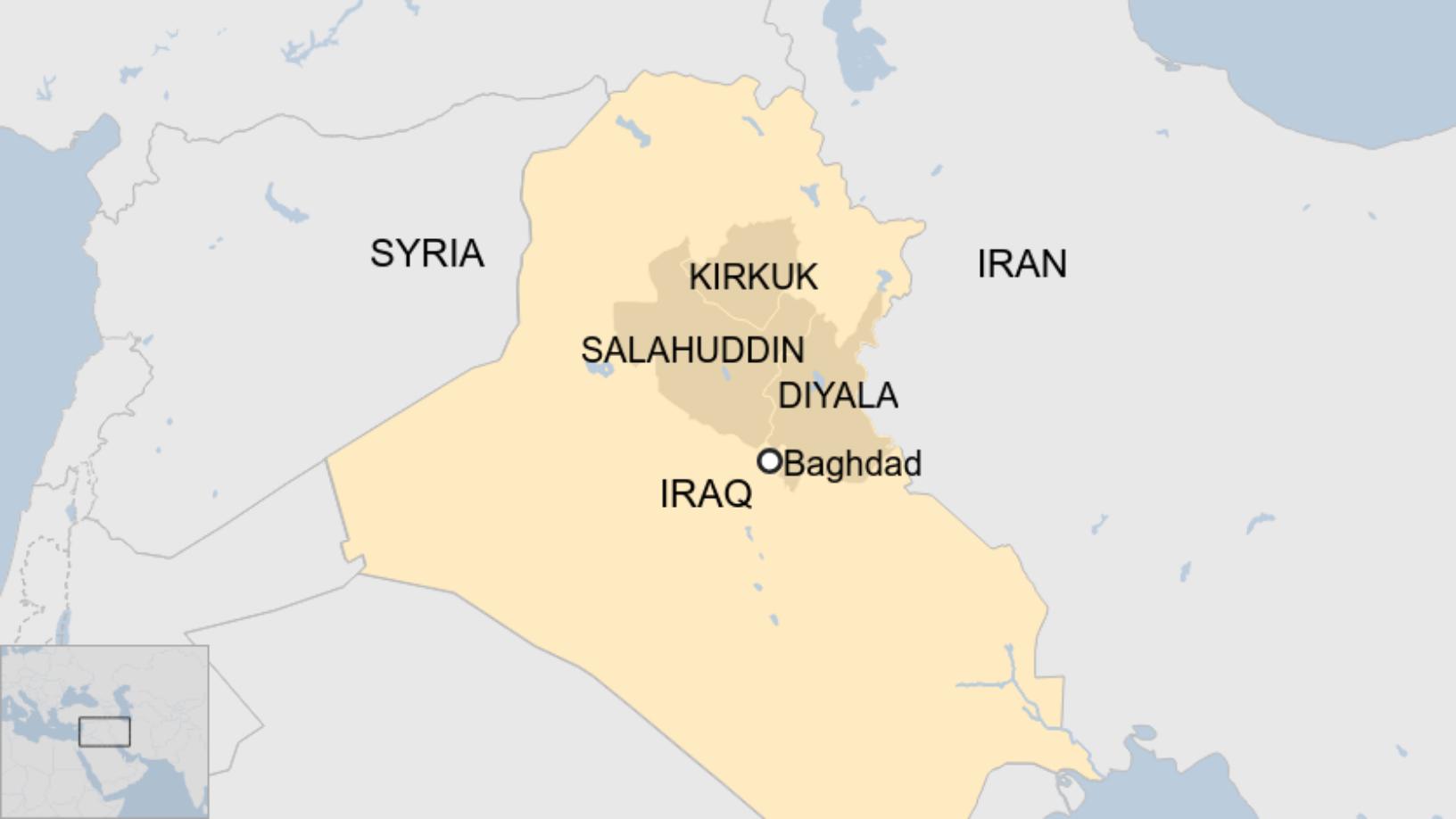 In one of Monday night's attacks, militants opened fire at an Iraqi army checkpoint on the boundary between Kirkuk and Salahuddin, about 160km (100 miles) north of the capital Baghdad, killing the two soldiers, a security source in Kirkuk said.
Another attack left four members of the paramilitary Tribal Mobilisation Force dead in the village of al-Asiriya, near the town of Tuz Khurmatu, the source added.
A third soldier was killed in the Abu Khamis area, 25km (15 miles) north-east of Baghdad, according to a security source in the city of Baquba.
On Sunday, five Tribal Mobilisation Force fighters were killed in clashes with IS militants in the village of Umm al-Karami, in north-western Diyala, while a soldier was shot dead by a sniper in the Ain Laila area, security sources said.
Four police officers reportedly died on Saturday in an attack in the town of Zaghnia, north of Baquba, while a bomb killed a solider in al-Uzaim.
IS cells have also been hiding out in the remote Western Desert of Anbar province, where Tribal Mobilisation Force units launched an operation on Monday. A military source said three militants were killed in the Mud ham area, two of whom blew themselves up when surrounded inside a mosque.

By Mina al-Lami, jihadist media specialist, BBC Monitoring
The number of IS attacks in Iraq doubled in April, with the jihadist group claiming 113 in total, compared to an average of 49 in the first three months of the year.
The attacks have also become deadlier and more brazen.
In late April, IS struck a key intelligence building in the heart of Kirkuk city, and on Friday it killed 10 members of the Shia-led paramilitary Popular Mobilisation Forces in Salahuddin.
The latter incident sparked political recriminations regarding who was to blame for the jihadist group's ability to mount such an assault in a Sunni-majority province. 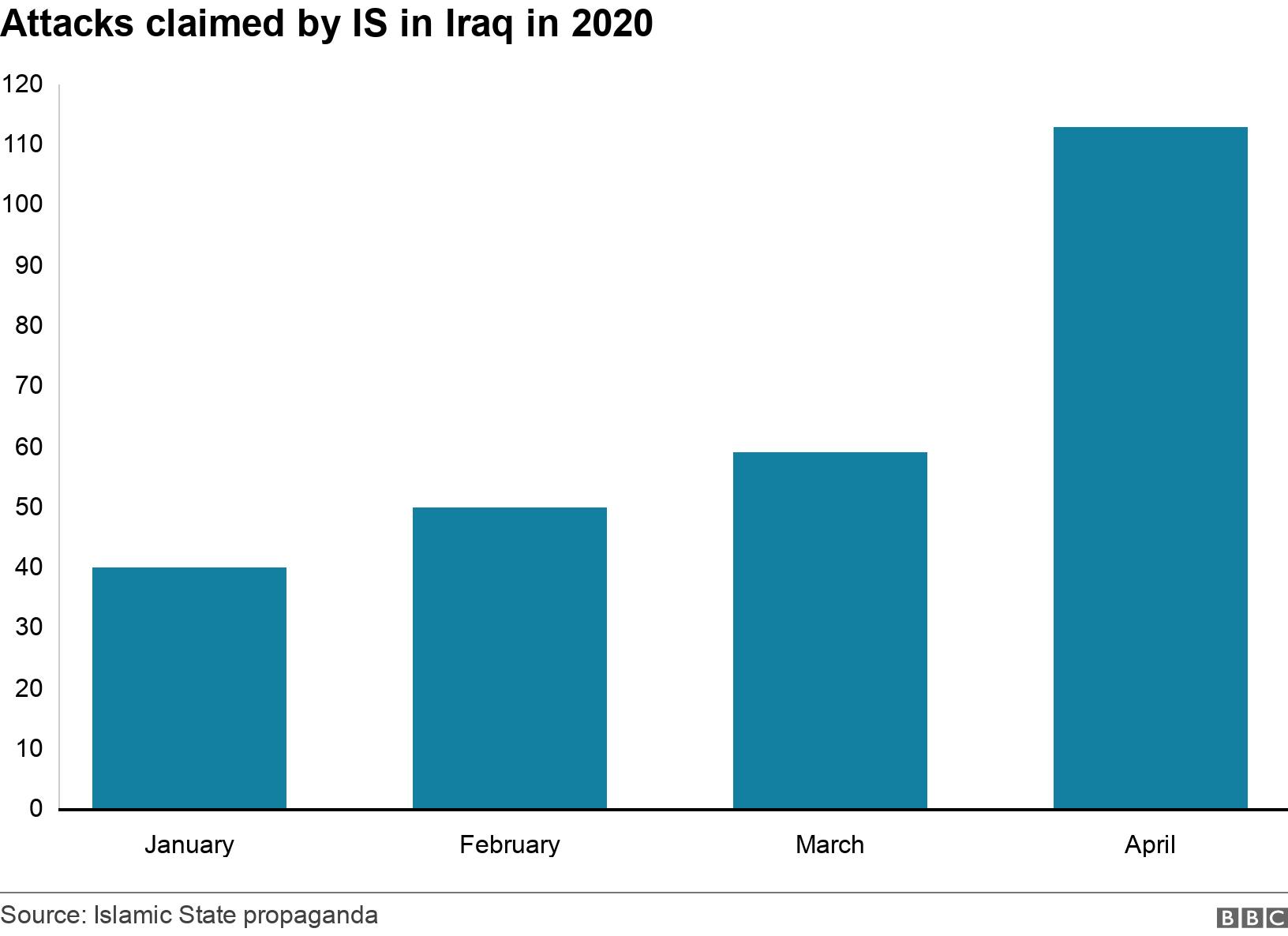 The spike in attacks coincides with the Islamic holy month of Ramadan, when jihadists typically step up their activities; movement restrictions and economic pressures linked to the Covid-19 pandemic; constraints on the deployment of US troops connected to health and political issues; and the ongoing political wrangling over the new Iraqi government.
IS appears to be exploiting some or all of those factors in an attempt to stage a comeback.
The group's weekly publication, al-Naba, has highlighted what it called the "downsizing" of the US presence in Iraq and "restrictions" on troop movements.
IS has also told militants that governments across the world are currently too preoccupied with battling the coronavirus to focus on counter-terrorism.