A university lecturer and nuclear scientist has been killed in a car explosion in north Tehran.

Mostafa Ahmadi-Roshan, an academic who also worked at the Natanz uranium enrichment facility, and the driver of the car were killed in the attack.

The blast happened after a motorcyclist stuck an apparent bomb to the car.

Several Iranian nuclear scientists have been assassinated in recent years, with Iran blaming Israel and the US. Both countries deny the accusations.

The US state department spokeswoman Victoria Nuland told reporters she did not have "any information to share one way or the other" on the latest attack.

Iran's Vice-President Mohammad Reza Rahimi told state television that the attack against Mr Ahmadi-Roshan would not stop "progress" in the country's nuclear programme.

He called the killing "evidence of [foreign] government-sponsored terrorism".

Two others were reportedly also injured in the blast, which took place near Gol Nabi Street, in the north of the capital.

"The bomb was a magnetic one and the same as the ones previously used for the assassination of the scientists, and the work of the Zionists [Israelis]," deputy Tehran governor Safarali Baratloo said.

Witnesses said they had seen two people on the motorbike fix the bomb to the car, reported to be a Peugeot 405. The driver died of his wounds after the attack though the car itself remained virtually intact.

The BBC's Mohsen Asgari, in Tehran, says that the explosion was caused by a targeted, focused device intended to kill one or two people and small enough not to be heard from far away.

The latest attack comes almost two years to the day since Massoud Ali Mohammadi, a 50-year-old university lecturer at Tehran University, was killed by a remote-controlled bomb as he left his home in Tehran on 12 January 2010.

Reports at the time described Dr Mohammadi as a nuclear physicist, but it later appeared that he was an expert in another branch of physics.

There was also confusion as to whether the attack had any domestic political overtones because of reports about his apparent links to an opposition presidential candidate.

However, in August 2011, an Iranian man - Majid Jamali Fashi - was sentenced to death for the killing, with state authorities saying he was paid by Israel's Mossad spy agency. Israel does not comment on such claims. 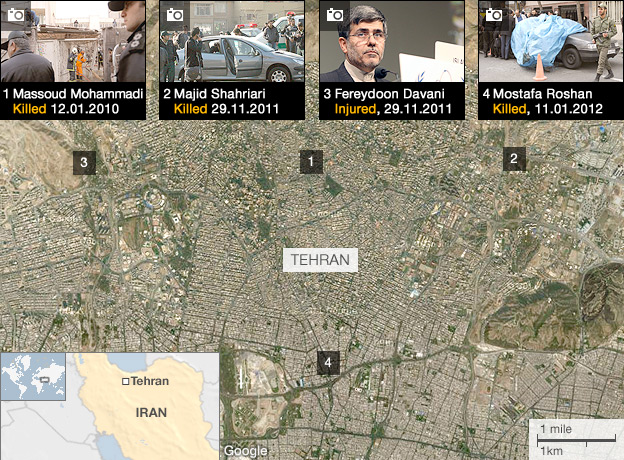 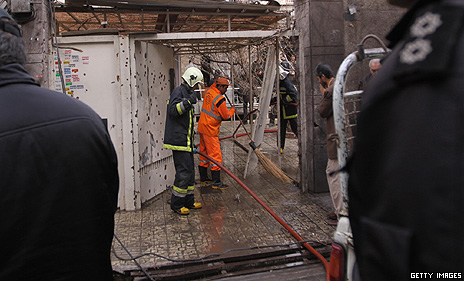 A physics professor at Tehran University. Died 12 January 2010 outside his home when a motorcycle rigged with explosives detonated next to his car. 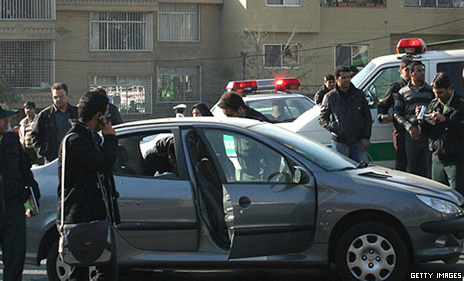 A member of nuclear engineering faculty at Shahid Beheshti University. He was killed in Tehran 29 November 2011 when a bomb was attached to his car by a motorcyclist. 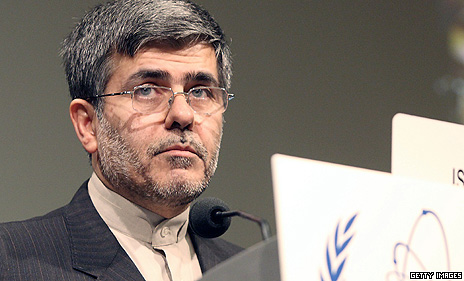 The future head of the Atomic Energy Organisation of Iran. He was injured 29 November 2011 when a motorcyclist attached an explosive device to the side of his car. 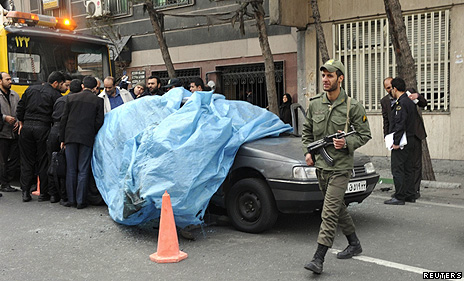 A professor at the Technical University of Tehran and senior supervisor at the Natanz uranium enrichment facility. He died 11 January 2012 after a bomb was placed on his car by a motorcyclist.

Of the latest attack, Fars reports that the bombing method appears similar to another 2010 bombing which injured former university professor Fereydun Abbasi-Davani, now the head of the country's atomic energy organisation.

There has been much controversy over Iran's nuclear activities.

Tehran says its nuclear programme is for peaceful energy purposes, but the US and other Western nations suspect it of seeking to build nuclear weapons.

In a statement quoted on Iranian television on Wednesday, the country's atomic energy agency said its nuclear path was "irreversible", despite mounting international pressure.