Ms Fernández took over the presidency in 2007, succeeding her late husband Nestor Kirchner.

She was then re-elected in October 2011 with a landslide victory, and continued to rule until 2015.

Despite repeated allegations of corruption, she remains popular - particularly with low-income families who are bearing the brunt of current President Mauricio Macri's austerity policies.

She has denied any wrongdoing.

On 18 May, Ms Fernández announced that she was running for office again in the national election on 27 October. However, this time she is standing to be vice president.

Cristina, as the majority of Argentines call her, was born on 19 February 1953 in La Plata, the capital of the province of Buenos Aires, where she went on to study law.

She married Nestor Kirchner, whom she met at university, in 1975. A year later the couple went to live in his home region, the southern province of Santa Cruz.

At the end of the 1980s she embarked on her political career - first as a provincial then as a national deputy. Meanwhile, her husband rose through the ranks of the Peronist political movement.

In 1991, Mr Kirchner was elected governor of Santa Cruz. He won two more terms, while Ms Fernandez supported him as a deputy.

When Mr Kirchner took office as president in 2003 - in the midst of one of the worst economic and social crises in the country - a similar pattern emerged.

By then Cristina Fernández was a senator with her own political weight in Congress, where she actively supported her husband's policies that included boosting social spending.

Ms Fernández cemented her political position in the congressional elections of 2005.

Taking 46% of the votes, she won in the province of Buenos Aires by beating her main rival Hilda Gonzalez, the wife of former President Eduardo Duhalde (2002-2003).

During Mr Kirchner's administration there was almost no decision taken in which she did not have a say, her influence exceeding that of an ordinary lawmaker.

She was also the first senator to have an office within the presidential palace, provoking criticism from the opposition. The governing party insisted that the office was small and was hers by virtue of her position as first lady.

Occupying the presidential palace, the Casa Rosada, in her own right, former president Fernández broadly continued her husband's policies.

There were further moves to address human rights abuses of the past. Argentina also became the first country in Latin America to legalise same-sex marriages.

Under her, Argentina renewed contacts with the International Monetary Fund after years of hostility and moved to renew negotiations over paying Argentina's debts to the Paris Club of lender nations. 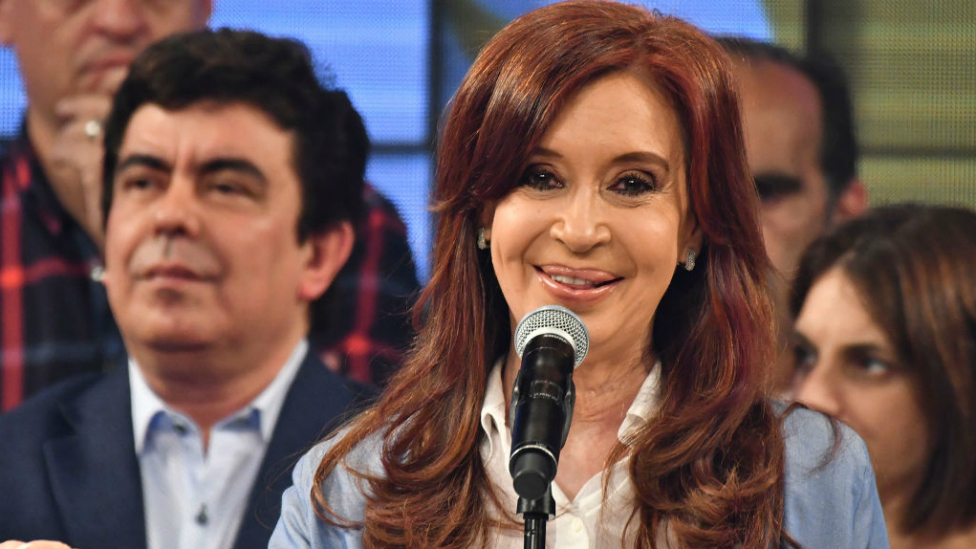 I have the honour to be the first woman to be re-elected in the country. What more culd I want?

Cristina Fernández has in the past been compared to Eva Perón, Argentina's legendary first lady who formed a formidable ruling partnership with her husband Juan Domingo Perón in the late 1940s and early 50s.

But Evita was never elected. Cristina Fernández, by contrast, was the country's first elected female president.

"I have the honour to be the first woman to be re-elected in the country. What more could I want," Ms Fernández told supporters after her victory on 23 October, 2011.

In October 2013 - two years after her election and three years after the death of her husband - she was forced to take a month off work because of her own ill-health, after being diagnosed with bleeding in the brain.

However, she recovered from surgery and went on to serve another two years as president.

In 2015 she was defeated by Mauricio Macri, who was then the centre-right mayor of Buenos Aires. Since his inauguration in December of that year, Ms Fernández has been a vocal critic of his austerity policies, while simultaneously fighting off repeated accusations of corruption related to her two terms in office.

Four years later, in April 2019, she released her autobiography Sinceramente. In that book, she addressed the allegations made against her.

"They have done so before and are continuing to do everything possible to destroy me," she wrote. "They think they will end up knocking me down - clearly they don't know me."