Applause and cheering rings out every night in the huddled streets around 12 Octubre hospital in Madrid, hailing the 6,000 staff who work there as heroes.

"We're not heroes; we're health workers," insists Hernando Trujillo, a doctor tackling the coronavirus emergency in the working-class south of the capital.

The hospital has capacity for 1,300 beds and, at the height of the Covid-19 epidemic, close to 1,000 were being used to treat coronavirus patients.

"There was almost no transition. It was really quiet and then suddenly a mad rush. The collapse came in a day," says Laura Andújar, a 37-year-old emergency nurse.

Spain has seen more than 20,000 deaths and the Madrid region is at the heart of it: a capital city blighted by this virus.

This city has seen 7,000 deaths, more than other European capitals.

The contagion spread at a remarkable rate through the densely populated city and its cluster of suburbs.

The real death toll could be considerably higher as Madrid's regional government has revealed only 800 of 4,260 care home residents suspected of dying from Covid-19 were tested.

How health collapse came all at once

The first local infection is believed to have been detected on 27 February. By 15 March, there were 3,544 confirmed cases.

"What followed was two weeks of madness," says Laura Andújar. 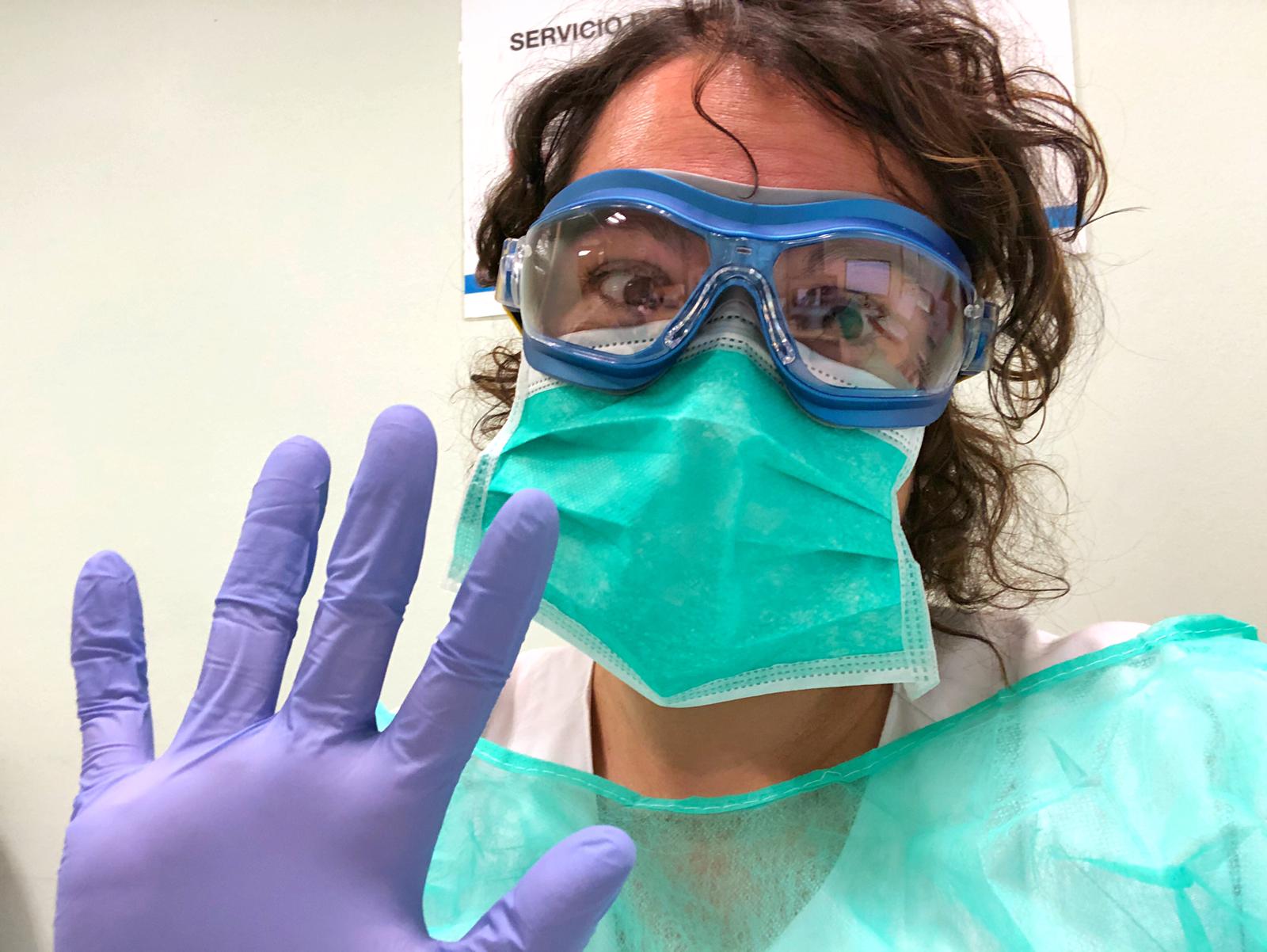 Sometimes we saw five times the normal number of patients and had to keep changing the areas we were taking up for triage, taking over one building after another

'I avoided Ebola but got this straight away'

Another emergency department nurse, Eugenia Cuesta, is no stranger to epidemics. She has dealt with cholera in Haiti and Ebola in Sierra Leone as a Red Cross volunteer.

"We collapsed. On a normal bad winter flu day you might get 100 people waiting. We had 220 from Covid-19, and people ended up sleeping in corridors," she remembers.

And in this outbreak they were not prepared for the onslaught. "Five days in, I got a cough and tested positive."

"The protective equipment arrived late and is still insufficient. I avoided cholera and Ebola infection, and I got this straight away," she says. When she came back at the end of March she found "the same degree of disorganisation".

Her colleagues had become used to chaos and were too exhausted to consider working in other ways, she believes.

Doctors at the hospital admit they had a lot to learn, and fast.

"At the start, just as the population is very nervous about coronavirus, so were we as doctors," admits Dr Trujillo, a 35-year-old Mexican kidney and intensive care specialist who accepts he is not an expert in contagious disease.

"But as days go by and medical publications start coming out, we have learned a lot. The hospital committee meets every day to discuss different treatments and what to look out for in analysis," he adds.

This could be the main reason why Spain has one of the largest known levels of infection among health professionals in the world, with more than 27,500 catching Covid-19.

12 de Octubre hospital declined to comment on the issues raised in this article, but staff paint a mixed picture of the availability of PPE.

Enrique Morales, a 52-year-old kidney specialist, says he had full use of plastic protective equipment when visiting Covid-19 patients, but for other work has only had a paper gown as protection.

"The shortages we had anyway have been brutally exposed," he told the BBC.

From the second week of the crisis, PPE became scarce, says Dr Trujillo. Respirator masks ran out so they had to use two surgical masks as an alternative. "We doctors can stand back from patients, so it's more important for nurses."

Because there was not enough protective equipment, nurses said they had to overuse what they had, sometimes wearing it for an entire shift.

Eugenia Cuesta says the risks are far too high. 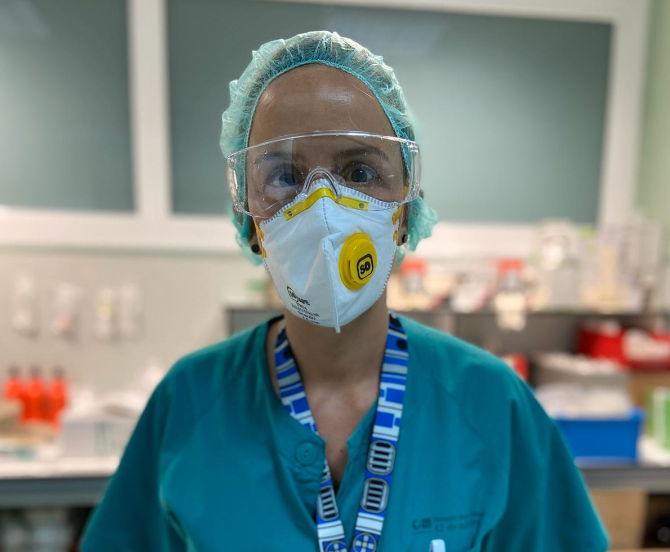 Two pairs of gloves makes touch harder. Goggles steam up and I see people touching them and taking them off because they are tired

"The mortality rate is nothing like Ebola, say, so we end up accepting the lack of security," she says.

She believes they should all have been screened to prevent contagion among the hospital team.

Dr Morales needed hospital treatment after catching Covid-19 and agrees failure to test health workers whether they had symptoms or not has put the system under greater pressure.

Under Spain's lockdown laws hospital patients cannot have visitors, and for some patients that feeling of absolute solitude has aggravated the illness.

"You're like a plague victim, with no visits allowed," says Dr Morales, "stuck between four walls and just the occasional health worker saluting you from afar."

For all the health workers, the crisis has posed impossible dilemmas.

Nurse Cuesta speaks of separating elderly couples when one tests positive and the other has to go home alone.

For Dr Morales it is the decision of who gets the intensive care bed, and who does not.

"If you have two 35-year-olds, and one has renal problems, you give the place to the one without renal problems," says Dr Morales. Some of his kidney patients would have had a good chance of survival but died, he believes.

"There was an old lady, she was so frightened and struggling to breathe," says Laura Andújar. "I thought the most important thing I could do was to stay there and hold her hand for five minutes."

"In my mask and goggles, she couldn't see my mouth but I smiled with my eyes. She actually got better."

That, of course, is not always the case and informing relatives is made all the harder by a lack of physical proximity to the family.

"When things are going badly with a patient, we would usually talk several times a day with a family," explains intensive care doctor Rubén Viejo. Trained at 12 de Octubre, he now works at another hospital.

Being there prepares both family and doctor for any negative news but now relatives miss that entirely.

"They don't even know exactly where the patient is, whether they are dressed properly and if they are clean. And they cannot say goodbye.

"It's unlike anything we've seen before. The immune system goes haywire and there is major swelling in the lungs, but also clots of blood appear in the lungs and in blood vessels elsewhere that can cause organ failure."

A glimpse of hope

Things have begun to improve at the hospital.

Results are getting better as doctors learn about the illness and pressure on resources eases as the rate of new infections in Madrid drops to less than 2% a day.

"In bad times, people help out," says Ms Andújar. "They are creating neighbourly networks and this is supplying things we need. Well done to so many people for staying at home; the infernal period is now over."

"We hear the applause and head towards the windows. It recharges us with energy. We all have recordings of it on our phones," says Dr Viejo.

But not everyone believes it will last.

"Today we get applause at 8pm every evening, but I am not sure we will get the same support when we demonstrate for better conditions and support for public health," warns Eugenia Cuesta. "People forget quickly."