The head of the European Commission has sent a strong message of support to Greece in its attempts to stop migrants crossing its border from Turkey.

"Our first priority is to ensure order is maintained at the Greek external border, which is also a European border," Ursula von der Leyen said.

Turkey lifted controls on migrants exiting for the EU on Friday.

It took the decision after suffering a heavy military loss in north-west Syria, where it says it has been trying to create a safe area to resettle millions of Syrian refugees it took in during the ongoing civil war.

At least 24,000 people have been stopped from crossing the border from Turkey since Saturday, according to Greek government figures.

Austrian Prime Minister Sebastian Kurz has accused Turkish President Recep Tayyip Erdogan of using the migrants as pawns. He also announced that his government had strengthened Austria's borders to make sure the mass influx of refugees and migrants of 2015 was not repeated.

EU foreign policy chief Josep Borrell is due to visit Ankara to discuss Turkey's decision to drop restrictions on migrants, abandoning a deal struck in 2016.

How is the EU helping Greece?

The support she announced for Greece included:

"The Greek worries are our worries," she told reporters at the Kastanies border crossing.

"This border is not only a Greek border but it is also a European border and I stand here today as a European at your side... We have come here today to send a very clear statement of European solidarity and support to Greece...

"I am fully committed to mobilising all the necessary operational support to the Greek authorities."

She added that she wanted to express her "compassion for the migrants that have been lured through false promises into this desperate situation".

Charles Michel said it was very important as to protect Europe's borders but also to show respect for international law.

He called on Turkey to keep to the 2016 agreement.

Defending his tough line on maintaining the border, Prime Minister Mitsotakis said Greece could not and would not be "blackmailed".

"This is no longer a refugee problem," he said. "This is a blatant attempt by Turkey to use desperate people to promote its geopolitical agenda and to divert attention from the horrible situation in Syria."

He tweeted photos of himself meeting Greek security forces.

What is the situation at the border?

Monday night was quiet in comparison with events over the weekend when thousands of migrants clashed with Greek security forces, a Greek army officer told Reuters news agency near the Kastanies border crossing.

"There were only a few attempts today [by migrants to cross the border]," he said. "Let's hope they get the message."

Some migrants including women and children could be seen in custody after being detained on the Greek side of the land border.

On the Turkish side, migrants who had been waiting around the border city of Edirne were again moving towards the frontier.

Several hundred migrants crossed to Greece from Turkey by boat in recent days but people were deterred by choppy seas on Tuesday, a police source told Reuters.

A young boy died when a boat capsized off the Greek island of Lesbos on Monday, Greek police say. It was the first reported fatality since Turkey opened its border.

Why is the humanitarian crisis so grave?

Nearly a million Syrians have fled to the Syrian-Turkish border since December, amid heavy fighting in the Idlib region between Turkish-backed rebels and Syrian government forces.

Turkey is already hosting 3.7 million Syrian refugees, as well as migrants from other countries such as Afghanistan.

President Erdogan said the EU had provided no help for resettling Syrian refugees in safe zones inside Syria and he predicted that "millions" of migrants would go to the EU.

Greece has blocked any new asylum applications for the next month, because of what it calls the "coordinated and massive nature" of illegal migration from Turkey.

But the UN Human Rights Council said Greece had no legal justification for suspending asylum procedures. 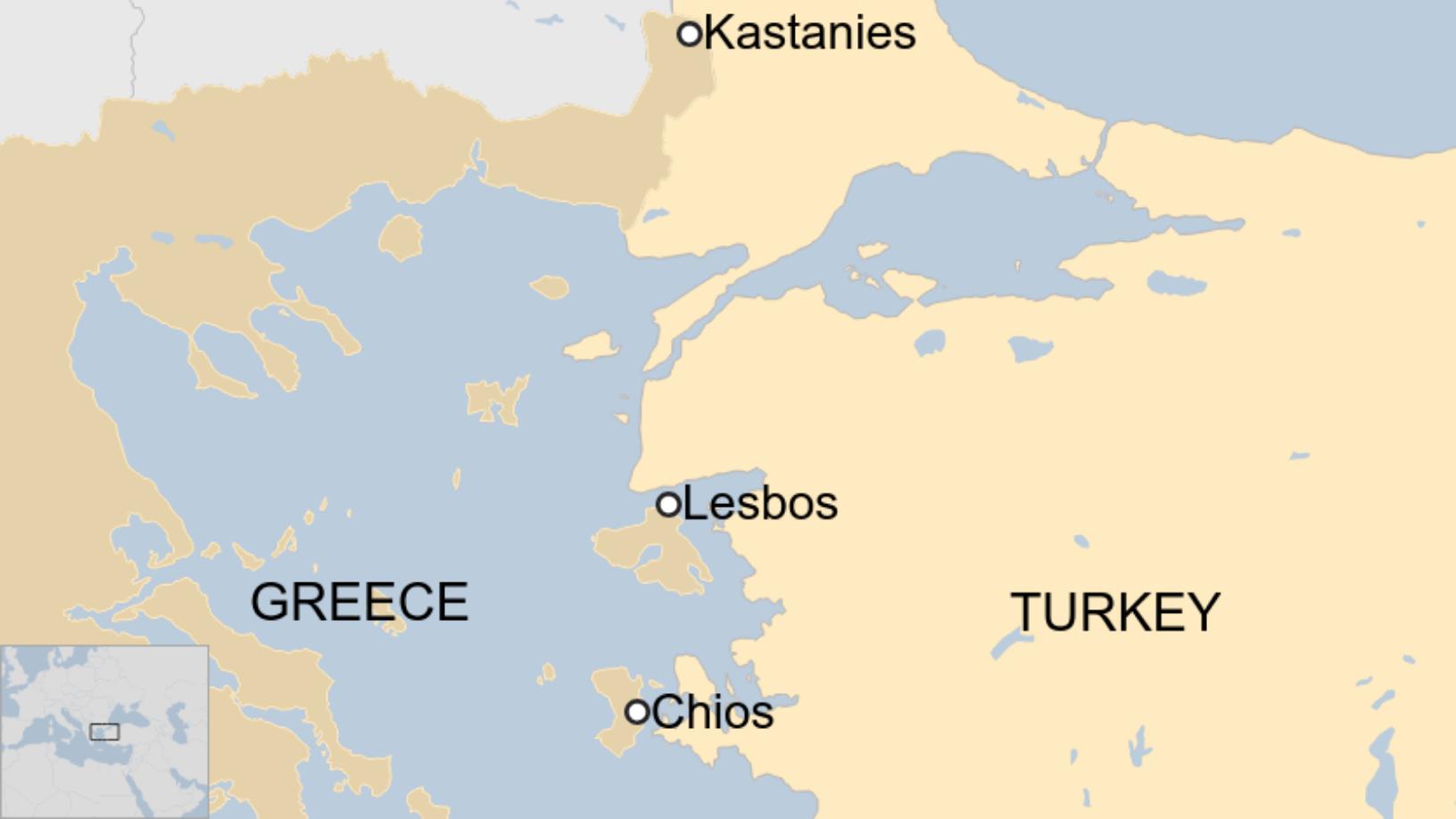 Europe's top human rights watchdog, the Council of Europe, has condemned both Turkey and Greece, calling the situation an "unprecedented humanitarian crisis".

"Everything must be done to de-escalate violence in the border region, including by ensuring that law enforcement authorities refrain from using excessive force," it said.