French riot police are forcibly removing Catalan pro-independence protesters who are blocking both sides of a motorway linking Spain and France.

Demonstrators camped overnight on the AP-7 highway at a north-eastern border point near the Spanish city of Girona.

It comes as the Catalan parliament backed a non-binding motion on the right to exercise self-determination.

And, in a blow to the Spanish government, a jailed Catalan leader has won an initial court victory in his fight to take up a seat in the European Parliament.

What happened at the border?

Up to 2,000 protesters first gathered at the border on Monday, using vehicles and barriers to block the road before sitting on the tarmac.

The roadblocks were spread across the border and into French territory, Spanish newspaper El País reported.

After warning demonstrators that they faced being forcibly evicted if they did not disperse, police moved in - some armed with tear gas canisters.

Footage posted on social media showed French police officers using pushing people - in some cases dragging them one by one - to the Spanish side of the border at La Jonquera.

"The eviction begins at La Jonquera with the use of tear gas," wrote one protester.

The Catalan police force - the Mossos - also began removing people, many of whom had their faces covered.

According to reports, the demonstrators were told to move any obstructing vehicles within hours, before cranes would be used to clear them and fines issued of up to €600 ($660; £515).

How did so many protesters mobilise?

The protest was organised through an app by a group known as Tsunami Democràtic, which directs pro-independence demonstrators in Catalonia to protest sites.

Thousands of people arrived on Monday and dozens of vehicles were used to block the route, which is an important transport link between the two countries.

Following the police action on Tuesday, Tsunami Democràtic called for demonstrators to mobilise at a separate Spanish border point further to the west, at Behobia, near the Basque city of San Sebastián. 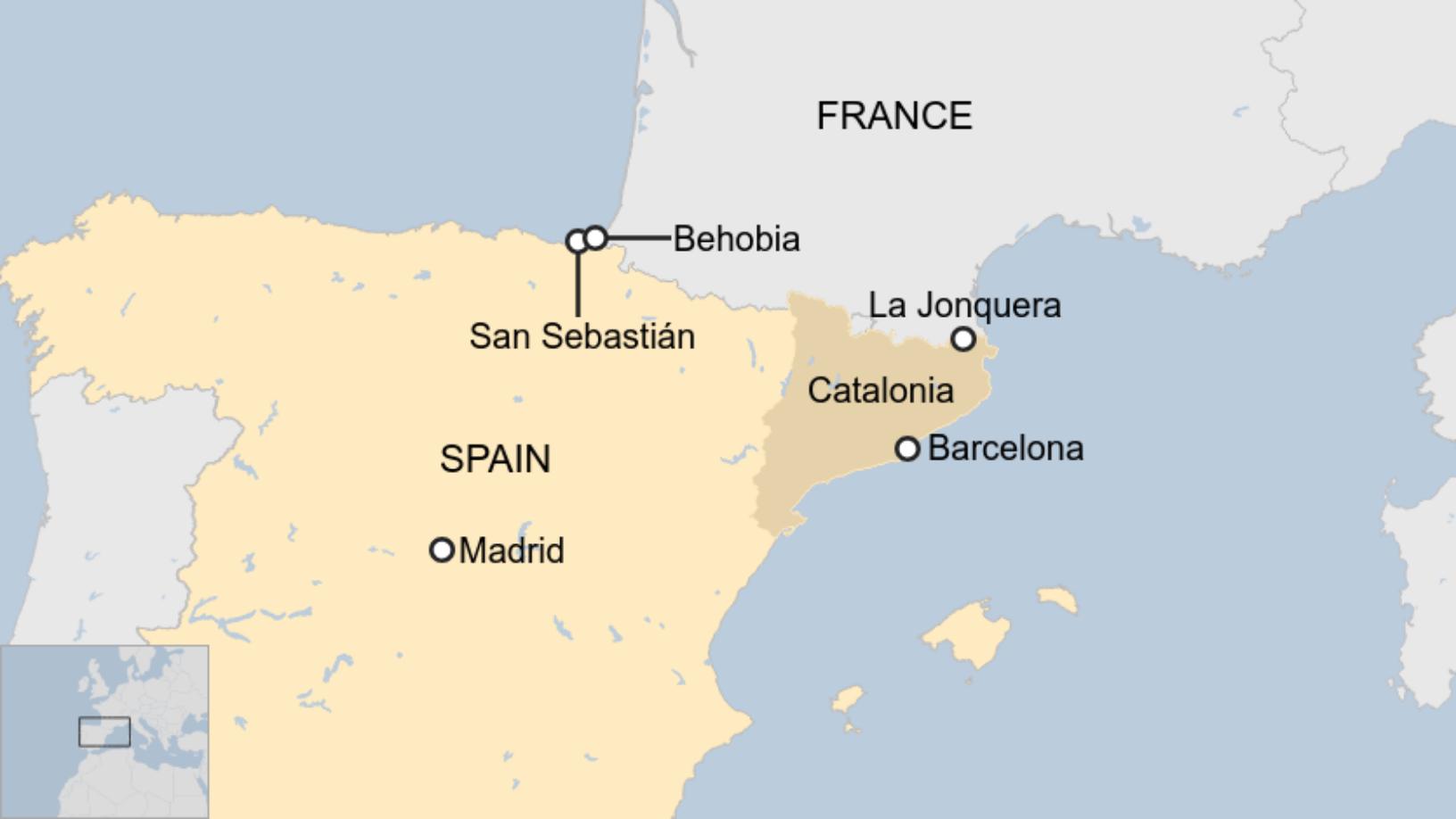 Last month, the jailing of nine Catalan separatist leaders for up to 13 years led to violent protests on the streets of Barcelona.

The leaders were convicted by Spain's Supreme Court of sedition over their role in an independence referendum in 2017, which Spain said was illegal.

What's the latest on the Catalan crisis?

On Tuesday, in defiance of a warning by Spain's Constitutional Court, Catalonia approved a non-binding motion expressing the will to exercise self-determination "to respect the will of the Catalan people".

Spain had warned the region's lawmakers that legal action would be taken if the motion was approved.

Meanwhile, the European Court of Justice (ECJ) has been advised that jailed Catalan separatist leader Oriol Junqueras's election as member of the European Parliament (MEP) should be respected.

The legal advice is a setback to Madrid and means that it is now likely that the ECJ will order in favour of Mr Junqueras who is challenging for the right to sit in the parliament.

Mr Junqueras was barred from attending a ceremony to swear an oath to the Spanish constitution and the ECJ's advocate general advised that not swearing the oath should not stop him taking up his seat as an MEP.

Vox takes a hard-line stance on the issue of Catalan nationalism. Pro-independence Catalan parties also did well in the vote.

On Tuesday, the Socialists - who won 120 parliamentary seats - and the left-wing Podemos (We Can) party - with 35 seats - said they had reached an agreement on the basis of forming a coalition government.

"It's a deal for four years," Socialist leader and acting Prime Minister Pedro Sánchez said after announcing the news alongside Pablo Iglesias, the leader of Podemos. The leaders of the two parties had only recently refused to work together.

A pact, however, would still leave the two parties 21 seats short of a majority in Spain's 350-seat parliament. Even with the support of smaller regional parties, they would come up short and would need Catalan pro-independence MPs to abstain.

What sparked the Catalan protests?

Catalan nationalists have long complained that their region, which has a distinct history dating back almost 1,000 years, sends too much money to poorer parts of Spain, as taxes are controlled by Madrid.

The wealthy region in Spain's north-east is home to about 7.5 million people, with their own language, parliament, flag and anthem.

In September, a march in Barcelona in support of Catalonia's independence from Spain drew crowds of about 600,000 people - one of the lowest turnouts in the eight-year history of the annual rally.