Queen Beatrix of the Netherlands has handed the throne to her son Prince Willem-Alexander.

The 75-year-old monarch signed the instrument of abdication in Amsterdam after 33 years on the throne.

Willem-Alexander has now become the country's first king since 1890.

Huge crowds of orange-clad partygoers are in Amsterdam to pay tribute to the popular queen, who has maintained a recent Dutch tradition in handing over to a new generation.

Queen Beatrix had announced her intention to stand down in January, saying her son was ready to reign and that it was time for the throne to be held by "a new generation".

She formally relinquished the throne at a short ceremony in the Royal Palace on Tuesday, signing a statement which read: "I declare that I hereby step down from the monarchy of the Kingdom of the Netherlands, that the monarchy from this moment on is transferred to my eldest son and heir Willem-Alexander, Prince of Orange, in accordance with the statutes and the constitution of the Kingdom of the Netherlands."

There were huge cheers from the crowds outside, watching on giant screens in Dam Square, as she and the prince and his wife Maxima - a 41-year-old Argentine-born investment banker - signed the deed.

Shortly after, the three royals emerged on a balcony above the square.

The visibly emotional queen, who will now be known as Princess Beatrix, told the crowds: "I am happy and grateful to introduce to you your new king, Willem-Alexander."

King Willem-Alexander thanked mother for "33 moving and interesting years", saying he and the public and people in Dutch overseas territories were "intensely grateful" to her.

The three then held hands on the balcony as the national anthem was played, before the new king and queen's three young daughters were brought out to wave at the crowds.

Their eldest daughter, nine-year-old Catharina-Amalia, has become Princess of Orange and is now first in line to the throne.

Willem-Alexander will later be officially sworn in at a secular ceremony in the Nieuwe Kerk, a decommissioned church, before a joint session of the Dutch parliament.

In the evening, the royal family will take part in a water pageant.

Many royals and high-ranking dignitaries have been invited to take part in the events, including Britain's Prince Charles and the Duchess of Cornwall, Prince Felipe and Princess Letizia of Spain and Denmark's Crown Prince Frederik and his wife.

On Monday, Queen Beatrix thanked the nation, saying the people's devotion had given her the strength to carry on during her 33-year reign.

"Without your heart-warming and encouraging displays of affection, the burdens, which certainly have existed, would have weighed heavily," she said.

Paying tribute to her late husband Prince Claus, who died in 2002, she said he had helped modernise the House of Orange.

"Perhaps history will bear out that the choice of my partner was my best decision," said the monarch, who is known affectionately as Queen Bea.

She said hereditary authority of itself did not give substance to a contemporary monarchy; rather this was earned through "the will to serve the country".

Willem-Alexander has said he wants to "be a king that can bring society together, representative and encouraging in the 21st Century".

He has said he does not expect to be called "his majesty," saying instead people can "address me as they wish".

Queen Beatrix is the sixth monarch from the House of Orange-Nassau, which has ruled the Netherlands since the early 19th Century.

Correspondents say she is extremely popular with most Dutch people, but her abdication was widely expected and will not provoke a constitutional crisis. Under Dutch law, the monarch has few powers and the role is considered ceremonial.

He or she is expected to be politically impartial, co-sign acts of parliament, help with the formation of new governments and to undertake state visits. 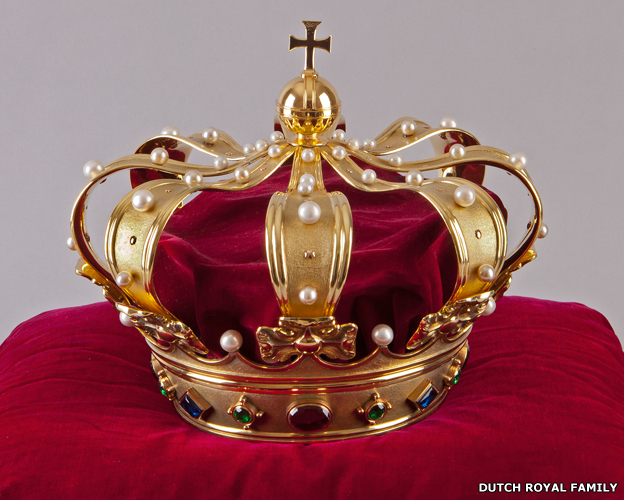 Used for ceremony rather than being worn, the crown stands 23.5cm high and is 31cm in diameter at its widest point. It consists of eight arches topped with an orb and cross.

The crown was created in 1840 for King Willem II, by Bonebakker Jewellers of Amsterdam. It is fashioned from silver plated with gold.

There were originally 72 fake pearls on the arches of the crown, but 24 were removed in 1898 and the holes filled with small gold studs.

A red silk velvet lining covers the inside of the crown.

There are no precious stones in the crown, the gems are made from coloured glass backed by foil.

The crown is not worn - and monarchs of the Netherlands are inaugurated rather than crowned - but it is placed on a cushion on a table while the ceremony takes place.

King Willem-Alexander has become not only the monarch of the Netherlands but also the Dutch Caribbean territories of Curacao, Aruba and Saint Maarten. He holds several military titles but requested an honourable discharge before his accession.

In recent decades it has become the tradition for the monarch to abdicate.

Queen Beatrix's mother Juliana resigned the throne in 1980 on her 71st birthday, and her grandmother Wilhelmina abdicated in 1948 at the age of 68.

Queen Beatrix has remained active in recent years, but her reign has also seen traumatic events.

In 2009 a would-be attacker killed eight people when he drove his car into crowds watching the queen and other members of the royal family in a national holiday parade.

In February last year her second son, Prince Friso, was struck by an avalanche in Austria and remains in a coma.